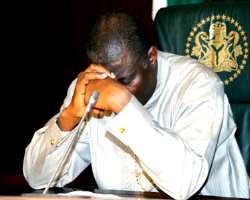 SAN FRANCISCO, July 01, (THEWILL) – President Goodluck Jonathan has expressed shock and sadness over the news of the passing away of Senator Akpor Pius Ewherido on Sunday at the National Hospital in Abuja.

In a statement issued by his Special Adviser on Media and publicity, Reuben Abati, the President extended heartfelt condolences to Senator Ewherido’s family, the Senate President, Senator David Mark and all of the late Senator’s colleagues in the upper chamber of the National Assembly.

The President said he joins them, members of the Ewherido family and the government and people of Delta State in mourning the distinguished legislator who served commendably as a member and deputy speaker of the Delta State of Assembly before his election as the Senator representing the Delta Central Senatorial District in the 2011 general elections.

President Jonathan also prayed that God Almighty will comfort Senator Ewherido’s family, relatives, colleagues in the National Assembly and all the people of his constituency.

He further prayed that God will, in His infinite mercies, grant them the strength and fortitude to bear the painful loss of the very promising politician at the relatively youthful age of 50.

The President's message came as the Senate on Sunday declared as devastating the sudden death of Senator Ewherido.

A statement issued by the Senate Spokesman, Senator Enyinnaya Abaribe, said Ewherido only took ill at the weekend and was not able to make it.

The Senate, Abaribe declared, " is heart broken and devastated over this unfortunate incident. " Senator Ewherido, he said, was one of the most articulate, erudite, urbane and easy-going senators who brought his wealth of experience as a Speaker of Delta State House of Assembly to bear on the floor, saying "He was always concerned about his constituents and Nigeria as a whole."

And in an apparent betrayal of emotion on Sunday, the Senate President, Senator David Mark, could not control his emotions as he wept openly over the death of Ewherido.

Describing the late senator as a forthright and vibrant parliamentarian, Mark,who was in Accra, Ghana, for a golf tournament had to cut short his trip and return home to mourn his departed colleague.

He noted that within his short but eventful membership of the Senate, the late Ewherido displayed patriotism, commitment and truly distinguished himself as a parliamentarian of a very high standard.

"We have lost a true friend and colleague. We lost a vibrant and a very articulate senator. We have lost a patriotic Nigerian who stood to be counted when it mattered, “ the Senate President said.

Mark, in a statement issued by his Special Adviser on Media , Mr. Kola Ologbondiyan, noted that one of Senator Ewherido's bills on how to address the issue of manslaughter in the country is currently under going thorough legislative works.

He added that the late senator should have been alive to see his good works aimed at saving mankind.

Promising that the Senate would do the needful to ensure that the immediate family of Ewherido does not suffer, Senator Mark told the government and people of Delta State, especially the bereaved family, to take solace in the fact that the late Senator lived an accomplished life worthy of emulation.

His message came as the Delta State Government, in a statement issued by the Secretary to the State Government, Comrade Ovuozourie Macaulay, expressed deep condolences to the family of the late Senator and advised Deltans, particularly members of his constituency, to remain calm.

“We pray that God grants his family, constituents and all of us, the fortitude to bear the irreparable loss,” the statement said.

In the same, the Speaker of the Delta State House of Assembly, Rt. Hon. Victor Ochei, Sunday in Asaba expressed shock at the death of the senator.

The Speaker in a statement he signed personally, wrote as follows, "It is with great shock that I received the news of the death of Senator (Barr.) Pius Akpos Ewheriodo, a colleague and an erstwhile Acting Speaker of the Delta State House of Assembly.

"My sense of loss regarding this illustrious son of Delta State stems from the fact that, he departed when his repertoire of knowledge would have enhanced our fledgling democracy, coupled with my vintage knowledge of him as a contemporary in the Third Assembly of the Delta State Legislature, where his persuasive and logical skills during debates on the floor of the House, distinguished him as a worthy ambassador to the advancement of legislative excellence, by becoming the first product of the Delta State Legislature to attain a Senatorial status, where he brought his legislative acumen to bear on debates pertaining to topical national issues as a Senator of the Federal Republic of Nigeria.

"The late lawmaker was an exemplary patriot, whose advocacy centred on the imperatives of socio-economic emancipation of the polity, as the credible platform for a corporate and indivisible Nigeria nation.

"Again, the late Senator Ewherido was a consummate political leader, arising from his insatiable quest for knowledge, through voracious reading as well as interacting with all strata of the society irrespective of tribe or religion.

"I sincerely wish to implore his immediate and extended family to take solace in the fact that though he has transmuted to celestial realm, his accomplishments in his short but eventful life will be a source of inspiration to the living.

"May I therefore on behalf of my family and the entire Delta State Legislature, wish him a sweet repose in the bosom of the Almighty God."