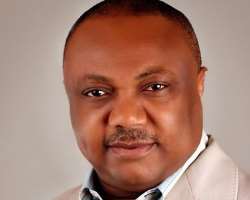 SAN FRANCISCO, June 21, (THEWILL) – The Supreme Court Friday dismissed an application filed by the candidate of the Democratic Peoples Party (DPP), Chief Great Ogboru, seeking to compel the court to upturn its earlier ruling that upheld the election of Emmanuel Uduaghan as Governor of Delta State.


In a ruling delivered by Justice Suleiman Galadima, the apex court said the application was an abuse of court process and noted that a similar application was filed and withdrawn by the lawyer that first represented the DPP candidate, Mr. Sabastine Hon, SAN.


The apex court also ruled that Ogboru was unable to convince the court that he did not direct Hon to withdraw the earlier application.


Today’s Supreme Court ruling brings to an end Ogboru quest to wrestle the Governorship of Delta State from incumbent Emmanuel Uduaghan, through the judiciary.