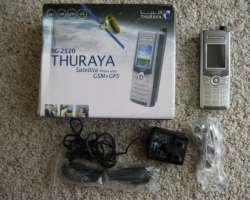 (Reuters) – Nigeria’s military banned the use of Thuraya satellite phones on Wednesday in northeastern Borno state, a step it said was designed to stop Islamist militants communicating.

President Goodluck Jonathan declared a state of emergency in Borno and two other states on May 14, ordering extra troops in to try to crush Islamist sect Boko Haram, whose insurgency against has killed thousands of people in the past three years.

It is the most determined offensive yet against Boko Haram, whose nickname translates as “Western education is sinful” and whose struggle to carve an Islamic state out of religiously-mixed Nigeria has destabilised Africa’s top oil producer.

Borno state military spokesman Lieutenant Colonel Sagir Musa said the ban was imposed after evidence emerged that Boko Haram used satellite phones to coordinate attacks on civilians, including in two school attacks in the past week.

Suspected Islamist militants fired on a school in Maiduguri on Tuesday, killing nine students.. The attack followed one in the city of Damaturu, also under a state of emergency, that killed seven pupils and two teachers.

The move will make it even more difficult for journalists to report from the conflict zone, something press freedom groups say Nigeria’s military has been trying to do anyway.

Nigerian forces say their offensive has enabled them to wrest back control of the remote northeast from Boko Haram. They say they have destroyed important bases and arrested more than 150 suspected insurgents.

But critics take the latest attacks as evidence that Boko Haram will prove almost impossible to stamp out using pure military means, since they inhabit a vast, semi-desert area with porous borders with Chad, Cameroon and Niger.