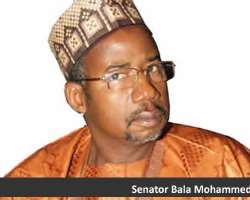 FCT Minister, Senator Bala Mohammed has served notice of his intention to slam a Five Billion Naira (N5,000,000,000:00) on the Kaduna based Desert Herald newspaper and its publisher, Alhaji Tukur Mamu for libelous defamation following series of damaging publications against him by Mamu through his newspaper and two others. Similarly, the Director of Treasury of FCT Administration, Alhaji Ibrahim Bomai through the same solicitors has threatened to institute a Two Billion Naira (N2,000,000,000:00) against Mamu for the same offence of defamation and libel.

The notice of the impending legal action was served on the defendant on Tuesday by the counsel to the FCT Minister, Chief Joe K. Gadzama, SAN and associates. In the notice, Senator Mohammed demanded for an apology and a retraction of the offending newspaper stories and publication by Tukur Mamu within seven days from the date of receipt of the notice failing which he would be left with no option than to institute full legal action against him and his newspaper, the Desert Herald.

'We demand that within seven (7) days of the receipt of this letter, you cause a bold retraction to be published in two (2) national dailies including the Desert Herald weekly Newspaper as well as two (2) other popular online media platforms a letter of apology addressed to our client and copy to our humble selves,' Gadzama wrote in the notice.

The Minister has also written to the Inspector-General of Police to lodged a complaint of criminal defamation, extortion and spreading of injurious falsehood by Tukur Mamu contrary to section 391 and 393 of the penal code.

The notice by the respected legal firm to Tukur Mamu on behalf of the FCT Minister reads in part:
'We act as Solicitors to Senator Bala Abdulkadir Mohammed, on whose firm instructions we write to you relative to the above. Our client is a distinguished Senator of the Federal Republic of Nigeria and a highly respected Honourable Minister of the Federal Capital Territory, Abuja. He is a man with an unblemished career of service to his country and humanity.

'On or about 14th May 2013 and the 6th June, 2013 the attention of our client was drawn by phone calls from members of the public and his colleagues to series of negative publications targeted at him using different media organs. Notable among those media organs are the Daily Herald Newspaper, the Leadership Newspaper, the People's Daily Newspaper and certain online publications. The said publications were intended to maliciously depict our client as corrupt, incompetent, greedy, shady and fraudulent thereby generally bringing his personality to serious disrepute and ridicule.

'One of the said offensive publications was on the front page of the Desert Herald Weekly Newspaper edition published on 14th May 2013, wherein a bold promo advert was placed to intimate members of the public to watch out for a book which the Desert Herald Newspaper is set to publish titled, FCT ADMINISTRATION: THE ROT WITHIN!, with the full face of our client, Senator Bala Mohammed on the cover page of the book.

According to Gadzama's letter, it is obvious that the proposed book intends to falsely cast the Minister, his aides and other FCT officials in bad light in the eyes of the public ostensibly to settle personal and other selfish scores which Tukur Mamu and his associates have against him.

In view of that, the letter strongly advised Mamu to in his own interest stop any further action towards the publication of such an ill-motivated book as failure to do so would make him vulnerable to litigation for defamation in a court of competent jurisdiction.

'We also urge you to imbibe the spirit of objective journalism and halt the series of attack against the person of the Hon. Minister of FCT considering his positive antecedents and impactful achievements particularly within his period of stewardship. It is no secret that the Hon. Minister has made giant strides in the FCT and is working tirelessly towards making Abuja to rank amongst the best capital cities not only in Africa but also around the globe. For his impressive scorecard, the Hon. Minister, no doubt, deserves commendation and encouragement from all well meaning persons as he strives to achieve more in this onerous task for the benefit of our beloved country and her citizenry,' he notice stated.

It added, 'We demand that within seven (7) days of the receipt of this letter, you cause a bold refraction to be published in two (2) national dailies and the Desert Herald weekly Newspaper as well as two (2) other popular online media platforms a letter of unreserved apology addressed to our client and copy to our humble selves.'

The FCT Minister's solicitors' petition to the Inspector-General of Police drew attention to the criminal dimension of the defamation and reads in part: 'It is our belief that the intention of the writer, Mr. Tukur Mamu is to use this as an avenue to try to seek financial gratification from our client. We are persuaded as legal practitioners to believe that the conduct of Mr. Tukur Mamu grossly offends against the provisions of section 391 and 392 of the Penal Code. He is currently engaged in criminal defamation of our client and spreading injurious falsehood.

'In view of this, we urge to use your office to cause an investigation into this matter with a view to bringing a prosecution before the appropriate court against Mr. Tukur Mamu. We are also further informed Mr. Tukur Mamu demanded the sum of 15 million naira (15,000,000:00) only from our client's Senior Special Assistant Media Mr. Nosike Ogbuenyi. We have provided a brief transcript of the recorded telephone conversation between Mr. Ogbuenyi and Alhaji Mamu Tukur.'”