JTF Not Involved In Oil Bunkering 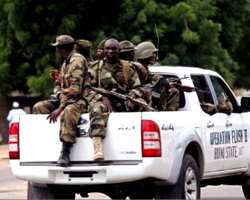 The attention of the Joint Task Force OPERATION PULO SHIELD has been drawn to a publication posted in your news medium POINT BLANK NEWS on Monday 17 June, titled 'JTF Accused of Actively Involving in Oil Bunkering At Oloma'.

In the said publication some anonymous persons as claimed by the reporter alleged that the 'JTF has been part of the incessant illegal bunkering activities around Well 2 in the area'. The report stated further that the JTF does this by colluding with some persons in the area.

It is quite surprising that these anonymous persons chose the wrong time to advertise their ignorance and engage in this callous act of tarnishing an outfit that has exhibited utmost commitment in carrying out its assigned tasks. Anyone who has been following the activities of JTF closely and reads between the lines will quickly realize that this is an attempt to cast aspersion on JTF by some mischief makers as the allegations are baseless and a sheer display of falsehood.

The truth, which is verifiable is that the general security situation of oil facilities in Bonny and its environ is calm. The Nembe Creek Trunk Line (NCTL) which is the major oil pipeline conveying crude from Nembe to Bonny had been shut down since April 2013, to enable repairs. The Trans Niger (TNC) and PPMC Pipelines which also convey crude oil from the hinterlands through Bonny to Port Harcourt have equally been under repairs, though providing skeletal services to sustain gas supply to Afam Power station.

Amazingly both lines have been under joint surveillance by both troops of JTF and Shell Petroleum Development Company (SPDC) overfly and ground trotting patrols in the last 72 hours with no adverse report.

The allegations by these anonymous and faceless persons in Oloma/Okoloma community are apparently concocted to smear the JTF and perhaps the reporter should have gone a little further to add some credibility to his story by hearing from all sides.

For the record, in the last 5 months of the year, the JTF had conducted a total of 289 anti-illegal bunkering patrols while over 1819 illegal refineries have been destroyed.  Also, 133 barges, 861 Cotonou boats, 51 tanker trucks, and 910 surface tanks were destroyed within the period.
Additionally, 13,946 drums of illegally refined products, 291 pumping machines and 22 outboard motor engines were seized and scuttled. Twenty four vessels of various sizes have also been arrested.

Sadly, the belief in some communities is that the oil is there to be scooped and nobody should stop them. But we will not compromise our mandate either. Take for instance, when we commenced the registration of vessels and boats exercise as a mechanism to enable us get at those big illegal oil thieves, we met with enormous opposition that fuelled trumped up charges and insinuations of complicity. But we did not however allow this to encumber us, as we were not acting arbitrarily and we eventually got over it. There are communities in the Niger Delta that have dissociated themselves from oil theft and other sundry crimes and have openly commended the JTF for its efforts at not only stamping out oil theft but also reducing criminality to abject minimum.

The JTF is operating true to its operational concept of zero tolerance for criminality irrespective of who is involved. The philosophy of command has been fluidity and mobility; meaning that without prior information the JTF Commander could surface in any Sector, Base, or even a Sub Sector. This has constantly kept the troops on alert. It is very disheartening to know that these allegations have mostly been used as a weapon of campaign of calumny by those persons or groups whose illegal oil bunkering trade have been impeded by our operations in the region. They are losing easy money and just have to fight back. While many are insinuations without proof, some are purely cases of impersonation by some criminally minded persons.
Very recently a fake captain Mr Ayibagbi Zidieghe posing as a JTF officer, in full Nigerian Army Combat regalia was arrested by our operatives in Yenagoa.

The Headquarters JTF has machinery for monitoring its troops, but we will equally appreciate genuine reports from the public on our operatives where they deliberately or out of negligence fail in their duties. Our doors at the Headquarters JTF, Opolo road, Yenagoa, are open to the general public.
Our operations are not mystified and we have always brought them to public glare through various media.