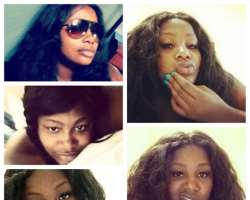 The craze for posting no make-up pictures is gradually becoming a trend in Nollywood. Several actresses have posted their photographs without make-up which have been commented on by their fans and critics as well.

The latest to have been eaten by the bug is bold actress, Adaora Ukoh. The big but sexy looking screen screen recently took some pictures of herself without make-up. But come to think of it, she really looks good. I hope i have not already influenced some decisions yet. But truly, what do you think of Adaora in this no make-up pix?

“If I leave my husband he will commit suicide” – Chioma Topliss

When Genevieve Had Her Bad Day? (Picture)

I Am A Sinner And God Will Forgive Me —Foluke Daramola