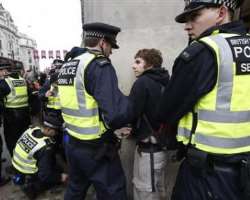 Riot police clashed with anti-capitalist protesters in running confrontations through the streets of central London on Tuesday and arrested 32 people as activists targeted some of the world's biggest companies before next week's G8 summit.

Police used chainsaws to break into a four-storey block in the Soho district where the StopG8 protest group had been staying before a "Carnival Against Capitalism" to coincide with the G8 meeting in Northern Ireland.

Aerial footage showed a man on the building's flat roof confront three police officers and charge towards the edge before being wrestled to the ground.

Several more police, some wearing abseiling ropes, rushed over to restrain him, inches from the roof's unprotected edge. More officers carried away the man, who appeared to have a bloody face.

The roof-top drama came as other protesters - who had threatened to target hedge funds, banks and multinationals - played cat and mouse with riot police through some of London's most fashionable streets.

"The G8 is just a front for the corporatocracy, for the kleptocrats. It is about making them more money and dividing up the world so they can all get richer," said a protester at Piccadilly Circus who gave his name only as Silver Fox.

"The G8 should be about ending all the wars - why don't they give peace a chance for once?"

Police vans chased groups of shouting protesters down Oxford Street, one of London's main shopping areas, to the visible shock of tourists and shoppers.

Police said they had arrested 32 people for offences including criminal damage, assault on police and possession of an offensive weapon.

'ONE COMMON STRUGGLE'
Activists, some with their faces covered, waved black, green and red flags as they marched down Oxford Street. They carried banners saying "No borders, no prisons, no capitalism" and "One Common Struggle".

Isolated scuffles broke out when police moved in to arrest individuals as a group of activists banged on drums and blew whistles beside snarled traffic.

"We are retaking the streets. We want to make a statement that capitalism is screwing the majority of people," said protester Emma Goldman. "If we were in (Turkey's) Taksim Square people would say we were anti-government protesters. Here they probably call us a mob."

Last month, StopG8 issued a map of 100 potential targets for people to "show their anger", identifying offices of financial organizations such as banks, hedge funds, defense manufacturer BAE Systems and mining and energy companies including ArcelorMittal and BP.

The list includes hedge funds Man Group and Paulson, private equity firm Blackstone, banks such as Citi and Barclays and embassies including those of Saudi Arabia and the United States.

The group, which describes itself as an anti-capitalist network "made up of autonomous groups and individuals", had refused to cooperate with police.

One banker working for an international firm with offices in central London said the staff had received an email indicating around 500 people would attend the protest.

One hedge fund, which asked not to be identified, said it had advised its staff to be especially alert to the protests.

Recent demonstrations against the British government's austerity measures have been marred by rioting anarchists. Many Britons angered by bank bailouts and bonuses during tough economic times blame the financial sector.

Britain's last major riots took place in 2011 when thousands brought chaos to the center of the capital and several cities in a display of looting and anger initially provoked by the shooting by police of a man in north London.