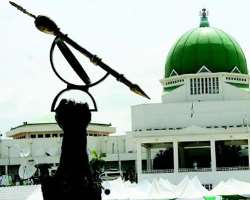 
The Bill will amend section 143 of the 1999 Constitution when passed.


Most political pundits believe the bill targets President Goodluck Jonathan who maintains a no love lost relationship with parliament.


During debate on the bill, the lawmakers differed on the proposed amendment but in the end passed it for second reading when Deputy Speaker, Emeka Ihedioha who presided over plenary put the question for voice vote.


Sponsors of the bill, Hon. Emmanuel Jime and Yakubu Dogara had argued profusely that it would remove "ambiguities in the process of removal of the President and the Vice President from office on allegations of gross misconduct and provide for more transparent and democratic procedure for impeachment and for other matters."


Section 143 of the 1999 Constitution of the Federal Republic of Nigeria (as amended) elaborately provided for the procedure of impeaching the President and, or the Vice President.


According to Dogara, there were lots of defects and ambiguities in section 143 of the 1999 Constitution.


The sponsors however denied the assertion that the move was targeted at impeaching President Goodluck Jonathan.


Dogara who quoted several foreign authorities to buttress the justification of vesting the powers to impeach a sitting President exclusively on the parliament, especially in America argued that one of the defects in the provision was the only basis to initiate impeachment proceedings against the President as enshrined in the Constitution was for "gross misconduct" which he said was not clearly defined.


Also buttressing his point, Jime, explained that the amendment was aimed at addressing constitutional challenges faced by the parliament.


Section 143(11) reads; "In this section, 'gross misconduct' means a grave violation or breach of this Constitution or a misconduct of such nature as amounts in the opinion of the National Assembly to gross misconduct."


Section 143(5) had made provisions that following a motion supported by at least two-third majority of members of each houses of the National Assembly, "the Chief Justice of Nigeria shall at the request of the Senate President appoint a panel of seven persons who in his opinion are of unquestionable integrity, not being members of any public service, legislative house or political party, to investigate the allegations...."


But House Leader, Mulikat Akande-Adeola while opposing the Bill said it was "totally undemocratic."


According to her, laws are made based on specifics of any given society.


"Nigerian democracy is still too young to be compared with the United States," she said.


Also towing the line of the leader, the Deputy Leader of the House, Hon. Leo Ogor cautioned that impeachment proceedings are usually extreme cases which the said section had explicitly provided for, adding that the proposed amendment negates the principle of fair hearing as the House "would be the judge in its own case" rather than the arbiter it is expected to be.


Also kicking against the amendment, Minority Leader of the House, Hon. Femi Gbajabiamila stated that the power to impeach already lies with the parliament "that is if we can define gross misconduct," adding that impeachment processes are supposed to be rigorous, painstaking and the last resort and so, the safeguards are needed.”


According to him, "the pillars of democracy regarding checks and balances, and fair hearing were fully embedded in section 143," thus there was no need for the amendment.