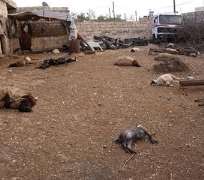 United Nations human rights investigators said on Tuesday they had "reasonable grounds" to believe that limited amounts of chemical weapons had been used in Syria and warned that the shattered country was in "free-fall".

In their latest report, they said they had received allegations that Syrian government forces and rebels had used the banned weapons, but most testimony related to their use by state forces.

The U.N. commission said it examined four reported toxic attacks in March and April but could not determine which side was behind them.

"There are reasonable grounds to believe that limited quantities of toxic chemicals were used. It has not been possible, on the evidence available, to determine the precise chemical agents used, their delivery systems or the perpetrator," Paulo Pinheiro, who chairs the U.N. commission of inquiry, told a news conference in Geneva.

"The witnesses that we have interviewed include victims, refugees who fled some areas, and medical staff," Pinheiro said, declining to be more specific for reasons of confidentiality.

President Bashar al-Assad's government and its opponents have accused each other of using chemical weapons.

Syria's ambassador, Faysal Khabbaz Hamoui, in a debate at the U.N. Human Rights Council on Tuesday, questioned the "neutrality and professionalism" of the panel.

Russian Ambassador Alexey Borodavkin called for sending U.N. experts to Khan al-Assal in the northern Aleppo province, where an alleged chemical weapon strike took place on March 19, one of the four cited by the inquiry.

"In this connection, we should recall that Damascus is ready to accept this group," he said.

A U.N. team of inspectors has so far been denied access to Syria and has been unable to establish whether chemical weapons have been used.

The U.N. rights team of more than 20 investigators conducted 430 interviews from January 15 to May 15 among refugees in neighboring countries and by Skype with people still in Syria.

But findings remained inconclusive and it was vital that a separate team of experts be given full access to Syria to collect samples from victims and sites of alleged attacks, the rights investigators said.

In any case, atrocities committed with conventional weapons far outweighed any casualties from the use of chemical agents, Pinheiro said, noting the absence of a large-scale toxic attack.

"SYRIA IN FREE-FALL"
"The war in Syria is a major catastrophe of our time," Pinheiro told the Geneva forum. "Syria is in free-fall.

"Brutality has become a tactic of war," he said.
At least 17 massacres were committed in the period under review, making a total of 30 since September, the report said.

Syrian leaders must be held accountable for directing a policy that includes besieging and bombing cities and executing civilians, the independent investigators said.

"The documented violations are consistent and widespread, evidence of a concerted policy implemented by the leaders of Syria's military and government," they said in their fifth report on the 26-month-old war that has killed more than 80,000.

For the past two weeks, Syrian government forces have laid siege to the border town of Qusair where aid agencies say hundreds of wounded and other civilians are trapped in dire conditions.

Syrian rebels and allied foreign militants have murdered civilians as well as captured soldiers, often after "show trials" in an increasingly sectarian conflict, the report said.

"They continue to endanger the civilian population by positioning military objectives in civilian areas," it added.

However, war crimes by rebels, including murder, torture and hostage-taking, did not reach the intensity and scale of those committed by government forces and affiliated militia.

"The commission referred only casually to examples of the crimes perpetrated by the 'takfiri' (extremist) groups including extrajudicial executions, slaying of captives, tearing open the bodies of victims and eating out their guts. Some horrendous scenes that shocked the whole world," he told the talks.

The team called on the U.N. Security Council to ensure that those responsible for crimes face justice, including by possible referral of Syria to the International Criminal Court.

"Accountability will come," said Carla del Ponte, a former U.N. war crimes prosecutor and a member of the commission.