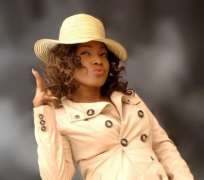 Sultry actress, Halima Abubakar is one screen queen that always gets herself in the news; either she creates them or the news creates itself around her.

No doubt, she is a lady qualified to be called a wife and mother, but she is still very much a single lady 'singing here I am'. In a recent interview, Halima claimed she would be ready for any when she clocks 34.

But if her latest post is anything to hold on to, it means Nollywood would welcome the newest 'married woman' in its 'cabal'.

Halima recently posted a wedding gown picture and dropped a note which reads, "next levels". It is not certain if she is just trying to catch fun with the post or she meant it.

© 2013 Nollywoodgists.com made effort to contact Halima on phone, but her number was not reachable as at press time.