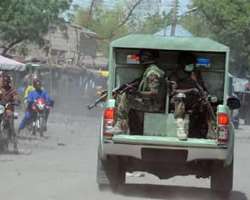 SAN FRANCISCO, June 01, (THEWILL) – The Presidency has condemned a recent report broadcast on Al-Jazeera, a foreign cable television channel, on the state of emergency declared by President Goodluck Jonathan in Adamawa, Borno and Yobe states, saying the report was in bad taste.

The Presidency also described the report as the attempt by sections of the media, especially the foreign media, to mislead the general public and the international community about the on-going state of emergency and military operations in the three states .

“For the avoidance of doubt, the declaration of a state of emergency and the consequential security operations are meant to protect the civilian population and the territory from the macabre and dastardly assault on the Nigerian state by insurgents and terrorists,” a statement issued on Saturday by the Presidential Adviser on Media and Publicity, Dr. Reuben Abati, said, adding “It is not an operation against innocent citizens as Al-Jazeera and others are suggesting.”

According to Abati, “In executing this sovereign objective, President Jonathan explicitly directed that the operations be conducted in line with applicable rules of engagement and peculiar care in managing a unique situation.”

The Presidential spokesman added that in an earlier statement, President Jonathan had also made it clear to the military high command and received assurances that those who violate their operational orders will be disciplined accordingly.

“In line with this regard for the rights of the civilian population, President Jonathan had ordered the release of women and under-aged persons in protective custody, and made arrangements for their immediate rehabilitation. Fifty eight persons in this category have been released,” Abati noted in the statement.

He also added : “The Armed Forces have also secured the release of six women and children in Boko Haram captivity. There is nothing to suggest so far any violation of operational orders by the troops operating in the North East. Their intervention has received popular support, among the civilian populace, and within two weeks of operation, the possibility of calm and normalcy resonates even as enclaves of terrorists are raided and their capacity to continue their reign of terror heavily compromised. This is a process and the Government owes it to the people of the North-East to see it through.”


Abati maintained that the Jonathan administration believes that media reporting of the reality of living in a state of emergency is needed to keep the local and international community well informed and to hold accountable those prosecuting the military operation to help build trust and sustain the public support needed to build lasting peace.


He however lamented that the last two weeks have witnessed mischievous attempts by a section of the media to generate negative propaganda around these operations in the North East.

“ Most recently, a video report by Al-Jazeera yesterday titled “Civilians among dead in Nigeria offensive” (May 31) sought to put the government and the people of Nigeria in bad light. This is regrettable. While we welcome an open interrogation of government’s activities, we reject any attempt to exploit the security situation in the North East to malign, discredit or otherwise undermine the country’s efforts by other surreptitious means. There can be no doubt that the Al Jazeera report of May 31 is in very bad taste,” Abati said.

According to the statement, “Two quick points will highlight the concerns here: (1) the video is that of the unfortunate incident that occurred in Bama on May 7 and has no connection with the current operation. If anything, the victims shown in the video were those the Boko Haram attacked before they launched an offensive on the Bama prison (2) the claim that the man in uniform shown in the video is a Nigerian soldier cannot be sustained, because in a war-like theater as we have on our hands, anybody could have been clad in a military fatigue; and we have seen Boko Haram members appear in military fatigues in their propaganda videos.

“Besides, no soldier has left the frontlines since the beginning of the operations. Surely, this type of reporting on a serious national security issue is irresponsible and should be deplored by all.”


The Presidential spokesman however reaffirmed the Federal Government’s commitment to and belief in the professionalism of the Nigerian military, an institution, which according to him, has served with distinction on many occasions across the region and outside.

“We deplore the effort to encourage terrorists through unverified and inaccurate reporting, and the desperation to blackmail the current peace and security process,” he added.