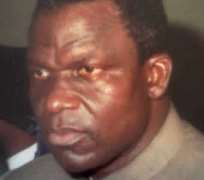 SAN FRANCISCO, May 30, (THEWILL) – Major General Mamman Tsoho Kontagora, the Deputy Chairman of the Subsidy Reinvestment and Empowerment Programme (SURE-P) and a former Minister of Works is dead.

THEWILL gathered that Kontagora died after a brief ailment on Wednesday night at the National Hospital Abuja.

President Goodluck Jonathan and Senate President, Senator David Mark have both expressed shock and sadness over his sudden demise.

A statement by the Special Adviser to the President on Media and Publicity, Reuben Abati, said, “On behalf of himself, the Federal Government and all Nigerians, President Jonathan extends sincere condolences to the late General’s family, the Kontagora Emirate Council, Governor Babangida Aliyu and all the people of Niger State.

“The President joins them in mourning the illustrious and indefatigable former Minister of Works and the Federal Capital Territory who, even in retirement, continued to serve his fatherland with zeal, vigour and enthusiasm whenever he was called upon to do so.

“President Jonathan believes that the nation will always honour the memory of the late Army Engineer for having served Nigeria with commendable patriotism and distinction during an excellent career in the Armed Forces and in various other capacities in the public service including Federal Minister, Sole Administrator of the Ahmadu Bello University, Zaria and Chairman of the Presidential Committee on the Development of National Stadia for the World Youth Soccer Championship in 1995.

Abati added that a delegation led by the Minister of the Federal Capital Territory, Senator Bala Mohammed would represent President Jonathan at General Kontagora’s

The delegation will also include the Minister of State for Power, Mrs. Zainab Ibrahim Kuchi and the Chairman of Sure-P, Dr. Christopher Kolade, the statement added.

Senator Mark in a statement by Kola Ologbondiyan, his Special Adviser, Media & Publicity said, "I received with shock and deep sorrow the news of the death of General Kotangora. I feel so sad about this. I never knew he was even sick. He was a brilliant officer and a distinguished administrator.

"I recall the revolution he brought to bear in the construction of road networks across Nigeria as the then minister of works and housing. He was honest and a disciplinarian who never compromised on standards. He was a goal- getter".

Senator Mark added that General Kotangora was a true nationalist and a patriot who stood to be counted when it mattered.

According to Mark, General Kotangora was one officer who never pretended about his position on national issues no matter how hard saying " he was reliable and dependable."

His legacies, Senator Mark maintained are legendary and " I can say without fear of contradiction that they would continue to stand the test of time".

He urged the government and people of Niger State especially the bereaved family to take solace in the fact that General Kotangora lived an eventful and accomplished life worthy of emulation.