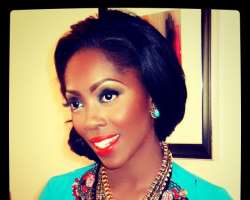 It has been confirmed that for the next two years, sexy singer, Tiwa Savage will remain as an ambassador for popular soft-drink giant, Pepsi.

An elated Tiwa Savage reportedly told the bottling company that, “I feel honoured, thank you Pepsi.” Tiwa Savage was signed in 2012 as a brand ambassador for Pepsi.