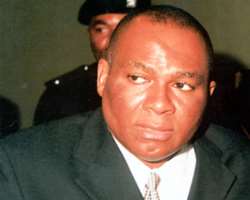 SAN FRANCISCO, May 28, (THEWILL) – The Economic and Financial Crimes Commission, EFCC, has expressed displeasure over the non-appearance of a former Governor of Enugu State, Chimaroke Nnamani at the resumption of his trial Tuesday, before Justice Mohammed Yunusa of the Federal High Court, Lagos.

According to an EFCC press statement, the Commission through its counsel, K.C Nzozuie said the ex-governor’s absence was part of the ploy to frustrate his trial. Nzozuie said the case which started in 2007 has suffered set back because of Nnamani’s ceaseless prayers for medical leave which he would prolong by bringing various excuses before the court.


Justice Yunusa in an earlier ruling on April 17, 2013 on an application for overseas medical treatment by the former governor, agreed that Nnamani could travel abroad to treat his ailment but added that he must return to the country before the next adjourned date. The judge also ordered him to file a notice of return to the court as soon as he gets back to the country and return his international passport to the court. However, at the resumed trial on Tuesday, Nnamani was not in court.


Counsel to Nnamani, Abubakar Shamsudeen told the court that his client couldn’t make it because he has not fully recuperated from the heart surgery he underwent at the United States of America. Shamsudeen, while apologizing on behalf of his client, added that Nnamani obtained a medical report from his doctors that he will need additional ninety days (90) to fully recover. He concluded by asking the court to grant his client more time as stated by the report. He thereafter sought the leave of court to tender the medical report before it.


But Nzozuie faulted the medical report presented before the court saying that the report did not state that the former governor was on admission neither did it state the number of days for which he will be under observation as claimed by the defense counsel. He urged the court to discountenance the defense counsel’s application and issue a bench warrant on Nnamani.

“My Lord, the letter has not changed from the previous ones presented by the defense. He has not been coming to court owing to one excuse or the other. This matter started in 2007 and based on one application or the other by the first defendant, we have had to take long adjournments in this matter. The conduct of the first defendant is aimed at delaying the trial, I urge your Lordship to discountenance the application and issue a bench warrant on the defendant. If he fails to appear we would be forced to ask the court to vary the condition for bail granted to him.” Nzozuie said.

After listening to arguments from both counsel, Justice Yunusa ruled that the medical report was just a letter addressed to the court. He said based on section 55 of the Evidence Act, the medical report should come in form of a medical certificate duly signed by a Federal or State government official from a certified government hospital. He said that Nnamani will be granted more time to appear, failure of which the law will take its full course. He then adjourned the case to September 25, 2013 for commencement of trial.

The case which clearly reveals some of the challenges faced by the EFCC in the prosecution of its cases was first re-assigned to Justice Charles Archibong following the transfer of Justice Abubakar (now of the Appeal Court) out of the Lagos division of the Federal High Court.