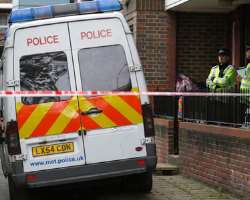 Police in London have arrested a man and a woman in connection with the murder of a British soldier near a military barrack.

Detectives said on Thursday they had arrested the unidentified suspects, both aged 29, over the murder of Drummer Lee Rigby, 25, who was hacked to death in Woolwich on Wednesday.

"This is a large, complex and fast-moving investigation which continues to develop," London police said in a statement. "Many lines of inquiry are being followed by detectives and the investigation is progressing well."

Meanwhile, Rigby's two main suspected attackers were in separate hospitals being treated for gun shot wounds. They were fired at by officers at the scene of the killing.

A new video has emerged of the two suspects, who appear to run at the police as they arrived at the scene of the crime.

They had been known to MI5 security services before the attack, reports said.

One man is believed to be 28-year-old Londoner Michael Adebolajo, who is of Nigerian descent, and is said to have converted to Islam 10 years ago.

Rigby served in Afghanistan in 2009, Britain's Ministry of Defence said.

"An extremely popular and witty soldier, Drummer Rigby was a larger than life personality within the Corps of Drums and was well known, liked and respected across the Second Fusiliers," a statement from the ministry said.

Extra police
London deployed more than 1,200 extra police officers on the capital's streets amid fears of a backlash on British Muslims.

The attackers had made references to Islam in amateur footage broadcast on television.


"People are shocked and scared from what they saw, but the government wants to make sure that there is no blame attributed to minorities. These extra police are on streets to reassure people," our correspondent said.

Footage broadcast by Britain's ITV news channel showed a man, with hands soaked in blood and holding a meat cleaver and a knife, claiming that he had, motivated by Britain's foreign policy, killed a soldier.

Witnesses said he requested to be filmed by a passerby and shouted "Allahu Akbar" during the killing.

In the amateur video, he said: "I apologise that women had to witness this today but in our lands, our women have to see the same ... you people will never be safe. Remove your government, they don't care about you."

The second attacker is believed to be 22 years old.

'Standing together'
Later on Thursday, President Barack Obama offered his support to Britain saying the US "stands resolute with the United Kingdom, our ally and friend, against violent extremism and terror," in a statement.

"I look forward to my trip to the United Kingdom to participate in the June G-8 Summit, hosted by Prime Minister Cameron, which will include discussions on the important global security challenges our countries face together."

After a second meeting of the government's emergency COBRA security council on Thursday, Cameron said the country would "defeat violent extremism by standing together".

"This action was a betrayal of Islam and the Muslim communities that give so much to our country ... we will not rest until we know every detail."

Cameron also praised the actions of Ingrid Loyau-Kennett, a cub scout leader who confronted the attackers immediately after the violence and tried to talk them down.

"They told her they wanted to start a war in London and she replied, 'you are going to lose, it is you against many," Cameron said. "She speaks for all of us."

Al Jazeera's Laurence Lee, reporting from Woolwich, said it was essential that political and religious leaders restore calm in the face of violence from the UK's far-right.

"The English Defence League wanted to use this to their advantage. They came out last night chanting 'no surrender to Muslims,' and clashed with riot police," our correspondent said.

Police in the county of Kent, south of London, said they had charged a man with "religiously aggravated criminal damage and burglary" to a mosque.

The Muslim Council of Britain condemned the Woolwich attack, saying: "This is a truly barbaric act that has no basis in Islam and we condemn this unreservedly."