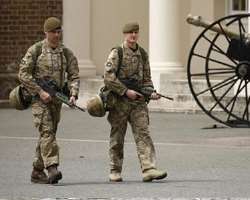 Britain's security services faced questions on Friday over whether they could have done more to prevent the murder of a soldier hacked to death in a busy London street after it emerged that his suspected killers were known to intelligence officers.

The two suspects, Michael Adebolajo, 28 and Michael Adebowale, 22, are under guard in hospitals after being shot and arrested by police after the murder of 25-year-old Afghan war veteran Lee Rigby on Wednesday in broad daylight. They have not yet been charged.

Adebolajo, filmed justifying the killing as he stood near the body holding a knife and meat cleaver in bloodied hands, was born in Britain to a Nigerian immigrant family. Adebowale is a naturalized British citizen born in Nigeria.

Another man and a woman have also been arrested on suspicion of conspiracy to commit murder, an early indication that police are investigating whether the attack was part of a wider plot.

Prime Minister David Cameron said a parliamentary committee would carry out an investigation into the role of the security services. Britain's MI5 domestic spy agency had been aware of the men, but neither was considered a threat, a government source told Reuters.

Dramatic video footage showing the moment when police shot the two men was published on a British newspaper's website on Friday. The shaky, 10-second clip shows one of the men sprinting towards a police car with a knife in his hand before he is shot and tumbles to the ground.

"It is important for the public to know that the security services and the police are operating properly," former London police chief Ian Blair told BBC radio.

Communities Secretary Eric Pickles said there would be a thorough investigation into the role of the police and intelligence agencies. However, he said the incident underlined how "difficult it is in a free society to be able to control everyone".

The attack was the first Islamist killing since July 2005, when four suicide bombers struck London transport. At that time, questions were also raised about the security services after it was revealed two of the bombers had been identified in a surveillance operation but were not followed up.

Richard Barrett, former head of counter-terrorism at the Secret Intelligence Service MI6, Britain's foreign spy agency, said it would be impractical to track every person who expressed radical views in case they tipped over into violent extremism.

"To find the signals, the red flags as it were, I think is enormously hard," he told the BBC.

Adebolajo, who converted to Islam and took the name "Mujahid" - warrior - used to attend events run by the banned Islamist group Al Muhajiroun, its leader Anjem Choudary has said. Detectives are trying to determine whether the suspects had links to militants in Britain or overseas.

Sources familiar with the investigation have said no sign has emerged so far of direct links between the attack and an Islamist insurgency in the suspects' ethnic homeland Nigeria. Their surnames suggest they are from the Christian south of Nigeria, not the Muslim north where insurgents are active.

Police stepped up security at religious venues and transport hubs.

'LONE WOLVES'
The murder, just a month after the Boston Marathon bombing, revived fears of "lone wolves" who may have had no direct contact with al Qaeda but plan their own attacks.

A source close to the investigation told Reuters the attackers were known to MI5. Adebolajo had handed out radical Islamist pamphlets, but neither was considered a serious threat.

Another source close to the inquiry said the local backgrounds of the suspects in a multicultural metropolis - nearly 40 percent of Londoners were born abroad - and the simplicity of the attack made prevention difficult. It required little preparation beyond buying a set of butcher's knives.

Peter Clarke, the former head of London's Counter Terrorism Command who led the investigation into the 2005 bombings, said if the men did turn out to be acting alone, it showed the difficulty the security services faced in trying to stop them.

"To an extent, if these people are acting as individuals it makes it even more difficult than if they're an organization," he told Reuters. "Instead of having to dismantle an organization, you are having to investigate and counter an ideology."

The two men used a car to run down Rigby outside Woolwich Barracks in southeast London and then attacked him with a meat cleaver and knives, witnesses said. The pair told bystanders they acted in revenge for British wars in Muslim countries.

Rigby, who had a two-year-old son, was not in uniform. The bandsman was working locally as an army recruiter.

In Nigeria, with a mixed Christian-Muslim population and where the authorities are battling an Islamist insurgency, a government source said there was no evidence the Woolwich suspects were linked to groups in west Africa.

British investigators are looking at information that at least one of the suspects may have had an interest in joining Somalia-based Islamist rebel group al Shabaab, which is allied to al Qaeda, a source with knowledge of the matter said.