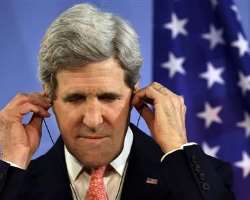 Israeli and Palestinian leaders must decide soon on whether to revive long-dormant peace negotiations to end their decades-old conflict, U.S. Secretary of State John Kerry said on Friday.

Ending two days of meetings in the region, Kerry said he had had "very productive" talks. But there were no obvious signs of any breakthrough, with neither side offering the sort of compromises needed to end a three-year stalemate.

"We are reaching the time where leaders need to make hard decisions," Kerry said at the end of his fourth visit to the region in barely two months as he struggles to overcome deeply entrenched positions that have snarled the peace process.

British Foreign Secretary William Hague, who has held separate talks in Israel and the Palestinian territories to voice support for Kerry, told reporters in Jerusalem he had not yet seen any significant progress.

"I don't think we are in a position to say that the necessary compromises have been made," he said.

"Unless bold leadership is there to make the most of this opportunity, then we face a bleak situation in the Middle East," he added, warning that time was running out to secure an independent nation for the Palestinians.

The Palestinians have repeatedly said they will only resume negotiations if Israel halts settlement building on land seized in the 1967 Middle East War, where it wants to establish its future state.

OUTPOST ANGER
The Israeli government has said there should be no preconditions and drew anger earlier this month when it turned to the courts to try to legalize four unauthorized West Bank settler outposts.

"It is also clear that when actions are taken, whether by court or otherwise, it is our view that those actions can be deemed by some to be provocative...So it is our hope that there will be a minimal effort there," Kerry said.

On taking office in 2009, U.S. President Barack Obama called on Israel to halt its settlement program. Netanyahu agreed to a partial freeze, but did not extend it beyond an initial 10-month period and Washington quietly dropped the demand.

Obama made his first official visit to Jerusalem this March to re-launch U.S. peace efforts, with Palestinian officials talking about a June 7 cut-off point for the U.S.-led diplomacy.

The Palestinians say it is pointless to hold negotiations while the Israeli building continues in the West Bank and east Jerusalem - home to some 500,000 settlers.

In the absence of formal peacemaking, the Palestinians last year gained de-facto statehood recognition at the United Nations. Israel is worried that they will use their new-found status to join the International Criminal Court and pursue war crimes charges against the Jewish state.

EU and U.S. diplomats have warned that the spread of the settlements could prove irreversible and Kerry has said the window of opportunity for securing an historic peace deal might close within two years.

"I made clear in my discussions that the parties should be focused on making progress toward...direct negotiations," he said on Friday, adding that each side needed to "refrain from provocative rhetoric or actions ... that take us backwards."