Ekwueme, Anyaoku, Okonjo-Iweala, Others Pay Tribute As Achebe Is Buried 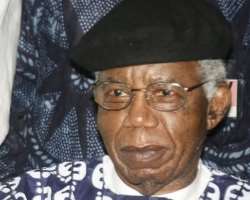 Nigerians who graced the funeral service of late Prof. Chinua Achebe on Thursday at St. Phillip's Anglican Church, Ogidi, Anambra state have continued to pour encomiums on the literary icon.

The occasion was graced by Presidents Goodluck Jonathan and John Mahama of Ghana, governors of Enugu, Imo, Abia and Anambra states.

In his tribute, former Vice-President Alex Ekwueme, described late Achebe as a trail-blazer or pace-setter who blazed the trail for revolution of African literature.

He said: 'Before he came on the scene, it was a matter of foreigners writing about us. His first book: `Things Fall Apart', made such impact worldwide. It was an opportunity for people to learn the impact the white people had on African culture.That made him a trail-blazer.''

Former Commonwealth Secretary-General, Chief Emeka Anyaoku, described Achebe as an `Iroko' of literary forest, who instilled confidence into African literature. 'He was an outstanding, by global standards, story teller and a social critic. His work will live for a very long time because he brought confidence in African literature.

Also commenting, the Minister of Finance, Dr Ngozi Okonjo-Iweala, said Achebe's literary contributions to the world would endure forever and urged political leaders to acquire wisdom from the works.

'He has also been a great commentator on Nigeria and Nigerian politics and society and we will remain forever proud of him and grateful for what he has contributed to this country. We've learnt a lot from his commentary over time about leadership, the need to have integrity and honesty and that is what we strive to do in our work.''

In her contribution, former governor of Anambra, Dame Virgy Etiaba, described late Prof. Achebe as a fearless, courageous and outspoken character, who would never be easily forgotten.

'All those who reacted negatively and positively to his last book: 'There was a Country'', have all come together to give him a befitting tribute.
This is because he was very hard working. He started with a humble beginning and ended in great heights,'' she said.

The minister of Labour and Productivity, Mr Emeka Nwogu, in his tribute, said the late literary icon lived a good life and was renowned as a writer of repute.

Nwogu, who commended the late writer for his last book also charged his critics to write an account of their experience during the Nigerian 30-month civil war that ended on Jan. 15, 1970.

To Delta's Gov. Emmanuel Uduaghan, Achebe was a moral compass for many Nigerians who stood on very strong moral grounds on a lot of issues in Nigeria. 'He will be remembered for his steadfastness in ensuring that we have a better society.'