Pilgrimage To Jerusalem, Mecca Is A Luxury That Edo Will Not Subsidise – Oshiomhole 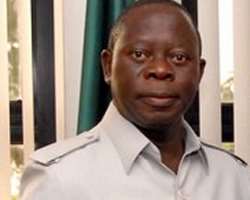 The Edo State governor says pilgrimage is a luxury and his government will certainly not subsidize the cost of going on one.

The Edo State Government has said that it will not subsidize the cost of religious ,pilgrimage as such subsidy will put a strain on an economy that is already dire.

The state governor, Adams Oshiomhole stated this on Thursday in Benin when the zonal Federal Commissioners and officials of the Nigerian Christian Pilgrims Commission paid him a courtesy visit.

The governor said he feels really strongly against subsidizing luxury especially when there are challenges confronting the state including homelessness, lack of potable water, decayed infrastructure, unemployment and hunger.

He described pilgrimage as a luxury, which the state's taxpayers' money would not be used to subsidize especially having had a deeper insight into the challenges that confront the Nigerian nation and Edo State.

'I have a deeper insight into the challenges that confront the Nigerian nation and even Edo as a state, and have come to the conclusion that pilgrimage is a luxury.

'Even from the point of view of the poor, a man who has no roof over his head cannot be spiritually uplifted if he goes to Israel and returns to a state of homelessness,' the governor said.

He said that pilgrimage was not a priority, but added that the state would not discourage those who want to go.
'What I am not ready to do is to take tax payers' money to subsidise someone who wishes to go and pray,'' the governor said.

'I have issues with that because people who pay taxes work so hard to pay,' he said.

The governor said that the state government would rather subsidise production, education and health care, adding that these were central to the survival of the people. He said that the Edo Government would not campaign for more people going on pilgrimage as it would put more pressure on the exchange rate.

'In any case, only clean heart rather than pilgrimage is what will decide our place hereafter,' he said.

Earlier, John Okpara, the Executive Secretary of the commission, said that they were in Edo on a sensitisation visit, adding that the visit was on the need for government to partner with the commission in its transformation process.

Mr. Okpara noted that with the legacies of the Edo Government, there was the need to create human beings that were morally and spiritually transformed to be able to sustain the legacies.

'Your love for the people of Edo is inspiring, your drive and determination to develop the state is encouraging, and your pursuance of justice and peace is something that the poor man hopes to live on,'' he said.