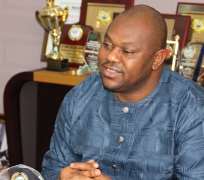 SAN FRANCISCO, May 22, (THEWILL) - The Peoples Democratic Party has been commended for initiating proactive programmes, aimed at repositioning the party for greater challenges, towards providing more dividends of democracy to the populace.

Speaker of the Delta State House of Assembly, Rt. Hon. (Engr.) Victor Ochei who represented the state governor, Dr Emmanuel Uduaghan made the statement at the closing of a two-day seminar for zonal, state and the Federal Capital Territory secretaries of the Peoples Democratic Party in Asaba recently.

He submitted that such programmes are veritable tools needed in not only making the party proactive but also ensuring that, the party remains the envy of its contemporary in governance and the delivery of democracy dividends the polity.

The legislator posited that, Governor Uduaghan’s numerous laudable achievements in the state stem from seminars of this nature, which are not only proactive but result oriented as it provides introspective analysis of the party’s score card.

According to him, recruitment, restructuring, updating staff manuals and improved funding policies as well as acquisition of skills in new technologies are imperative components in repositioning the party for greater challenges.

Also speaking at the event, Ambassador Kema Chikwe observed that change is an indispensable factor in an emerging democracy such as Nigeria’s, adding that ‘’change entails cultivating the courage of foresight beyond the limits of what exists today and indeed, the resilience to our vision, new thinking, new technologies new visions new actions must break the spirit of being bored with the same party and government in addressing the diversified needs of the Nigerian masses.

In his speech, the Deputy National Chairman of the party in the South- South zone, Dr Sam Sam Jaja urged the participants to apply all topics discussed at the seminar in their various areas of jurisdiction, as it will ultimately impact positively on the polity.