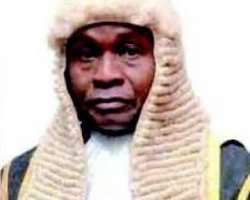 SAN FRANCISCO, May 22, (THEWILL) -The attempt by the immediate past Chief Judge of the Abuja High Court, who is now the Emir of Gumi, Justice Lawal Hassan Gumi, to stop his probe by the National Judicial Council (NJC) over alleged abuse of office as Chief Judge has hit the rocks.

At the resumed hearing of the petition against him on Wednesday, the panel set up to probe him by the NJC rejected his objection.

Gumi’s lawyer, Isreal Olorundare, SAN, who led another counsel, Sunday Ameh, SAN, had raised a preliminary objection challenging the competence of the NJC to probe Gumi on the grounds that Gumi had since resigned his office as a judicial officer since May 13.

In objecting to the probe, Gumi said the panel lacked the jurisdiction to hear the case against him, stating that having retired voluntarily and no longer being a judicial officer and having paid three months salary into the Federal Treasury in lieu of notice, he could no longer appear before the NJC.

He further stated that there were series of litigation still in respect of the matter pending before Abuja High Court and Federal High Court, adding that the NJC did not share concurrent jurisdiction with a high court.

The NJC however over ruled the preliminary objection as the panel held that it was a fact finding body set up before Gumi sent in his resignation letter on May 13 notifying the NJC of his voluntary retirement which was received on May 14.

"The act was allegedly committed before the 13th of May 2013 and not after, the preliminary objection was therefore overruled," the panel ruled as it knocked out the objection as hearing on the petition continues on Thursday.

This is as the case of the Chief Registrar of the FCT High Court, Toyin Yahaya, was referred to the Federal Judicial Service Commission (FJSC) having not yet been made a judge over the role she played in allegedly obstructing the execution the orders of an Abuja High Court.

It would be recalled that the petitioner, Nestello Gateways Group, had petitioned NJC, alleging the Gumi and Yahaya abused their offices by handing over the company's property to the Governor of Zamfara State , Abdulaziz Yari , after an Abuja High Court had ruled against the governor.

The presiding judge at the court, Justice Jude Okeke, had in a considered judgement, ordered the company to take possession of the property in question.

In the petition to the NJC, the group is asking the Council to order a thorough investigation into the matter with a view to bringing to book anybody found wanting.

The Group is also demanding that Gumi be ordered to restore their possession of the House situated at No 1 Fatai Williams Street , Asokoro, Abuja and that Gumi, who gave the instruction to return the property to Governor Yari, should restore the property to its original state.

The NJC was also asked to compel Gumi and Yahaya to enforce the payment of the outstanding profit of N333,333.00 per month for the premises from the November 1st, 2009 until vacant position was given.