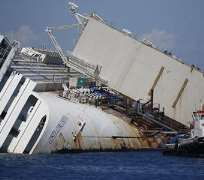 The captain of the cruise ship Costa Concordia, which capsized off Italy's west coast last year killing 32 people, will face trial for manslaughter as well as other charges, an Italian judge ruled on Wednesday.

The giant Costa Concordia flipped on its side outside the Tuscan port of Giglio in January last year after it struck rocks during a maneuver that brought it too close to the shore.

The accident triggered a chaotic night-time evacuation of more than 4,000 passengers and crew from the 290-metre-long ship (951-ft), which still rests on a rock shelf outside the port.

Captain Francesco Schettino left the ship before all the ship's crew and passengers had been taken ashore.

A judge in the Tuscan city of Grosseto ordered Schettino to be tried for multiple manslaughter, abandoning ship and other charges, with the first hearing set for July 9, Schettino's lawyer Francesco Pepe told Reuters.

If found guilty, Schettino could face up to 20 years in jail, according to Pepe.

Prosecutors rejected a plea bargain offer from Schettino last month but accepted those of five other officials, including four ship's officers and the crisis coordinator of the vessel's owners, Costa Cruises.

Costa Cruises, a unit of Carnival Corp, agreed to pay a 1-million-euro ($1.29 million) fine to settle potential criminal charges in April. That means that Schettino will be the only person tried for the maritime disaster.

"We expected from the beginning that he would be put on trial," Schettino's lawyer Pepe said. He argues that his client has been made a scapegoat for the accident.

The judge on Wednesday also rejected Schettino's request to use new evidence in the case that Pepe said would "clarify" that there were other factors in the accident beyond the captain's control.

A recording of a coastguard officer ordering Schettino to "get back aboard, damn it!" in a furious telephone call spawned a popular catchphrase that was printed on T-shirts in Italy.