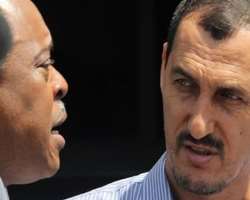 An Iranian man convicted of smuggling arms into Nigeria has been sentenced to five years in prison by a Lagos court.

Rockets, mortars and grenades were among the weapons seized from a ship which docked in Lagos in 2010.

Court documents said they were due for re-export to The Gambia, in defiance of a UN arms embargo on Iran.

Nigerian Usman Abbas Jega was convicted alongside Azim Aghajani, who is alleged to be a member of Iran's Revolutionary Guards and is on a UN blacklist.

'Praying continuously'
They were convicted on four of five charges relating to the shipment, reports the AFP news agency.

The crimes carried a potential life sentence, but Federal High Court Judge Okechukwu Okeke said he had been swayed by the defence's plea for leniency and the conduct of the men in detention, it reports.

The BBC's Will Ross reports from Lagos, Nigeria's commercial capital, that Aghajani prayed continuously as he awaited his fate.

The five-year sentence will be counted retroactively from when their trial began in February 2011, which means they will be freed in less than three years, AFP adds.

"In sentencing the accused, I have taken into consideration the plea for mercy by the defence team, but the law has to take its course," Judge Okeke is quoted as saying.

Defence lawyer Chris Uche said he would appeal against the ruling.

"I strongly feel that a lot of pressure from the international community has influenced the way this case has gone on,'' Mr Uche told journalists.

The United Nations placed Aghajani on a blacklist last year, labelling him a Revolutionary Guards member tied to "Iranian support for terrorism and extremism worldwide".

He denied the allegation.
The final destination of the weapons has not been established.

There has been speculation that they could have been intended for The Gambia's neighbour, Senegal, where there is a low-level rebellion in the south.

The incident led Senegal to recall its ambassador to Tehran.

It accused the Iranian government of failing to provide a "satisfactory" explanation about the destination of the weapons.

The Iranian government said the shipment belonged to a private company and was being sent to a "West African country", which it did not identify.

The arms were found inside 13 shipping containers labelled as building material.

Iran is under a UN arms embargo over its nuclear programme.