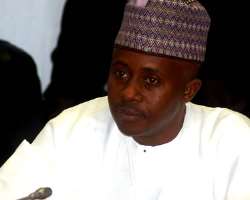 SAN FRANCISCO, May 10, (THEWILL) – Despite the attempts by the chairman and the secretary of the House of Representatives ad hoc committee on subsidy probe, Farouk Lawan and Emenalo Boniface respectively, to convince an Abuja High Court to quash the charges against them, the court on Friday dismissed their application, saying they must face trial on the charges of allegedly receiving $620,000 as bribe from businessman, Femi Otedola, to influence the report of the committee in favour of Zenon Oil and Gas Limited.

Presiding judge, Justice Mudashiru Oniyangi, held that going by Section 185(b) of the Criminal Procedure Code, the prosecution needed not attach the witnesses' statements, saying the only process provided for, to be attached, was the proof of evidence.

The judge added that non- attachment of the witnesses' statements does not make the charge incompetent.

"Even though I agree that the witness statement is not attached but I disagree that its non-attachment vitiates the charge. Where a statute provides for the manner in which a process should be filed, such manner must be followed, applicant's counsel has a misconception of Section 185( b).

"On that note, I hold that the court has jurisdiction to entertain, hear and determine the suit," Justice Oniyangi said.

"Once there is an evidence that will suggest that the accused has an explanation to make to the court on a matter, then there is a prima facie case, " Justice Oniyangi said as he held that having read the proof of evidence and the written statements of the accused persons, it was clear that a prima facie case had been established against them which they need to answer.

"The prosecution has presented sufficient materials before the court to warrant the grant of the leave to prefer charges against the accused persons," he added.

Ruling on the submission that the case was an abuse of court process, the trial judge held that there was sufficient materials before him to warrant the grant of the leave to prefer charges against the two accused persons.

"The court cannot turn around here to say the materials brought by the prosecution constitute an abuse of court process.

"The complaints of the applicants have no legal bases, the charge brought by the applicant does not amount to an abuse of court process," Justice Oniyangi said as he adjourned further hearing in the matter till June 19 .


He also ordered that the bail of the accused persons should continue.

It will be recalled that Lawan andEmenalo had asked the court to quash the charges of receiving $620,000 from Otedola to influence the report of the committee in favour of Zenon Oil and Gas Limited.

Their lawyer, Rickey Tarfa, SAN, said the court ought not to have granted the application for leave to prefer the charges because the prosecution failed to provide adequate materials necessary for the judge to exercise his discretion to grant the application.

Arguing the application to quash the charges, Tarfa asked the court to discharge the accused since no prima facie case had been made against them.

He argued that the foundation of the case against them was not legally laid.

According to him, the prosecutor failed to comply with the provisions of section 155 (1)(b) of the Criminal Procedure Code which required that statements of witnesses be attached to the application to prefer charges.

Although the trial was scheduled to commence on Friday, Tarfa argued that the court must first hear and determine the application to quash the charges.

He said the application to quash the charges also challenged the jurisdiction of the court to conduct the trial.

However, in his response, the prosecutor, Chief Adegboyega Awomolo, SAN, asked the court to dismiss the application even as he described it as a tactic to waste the time of the court.

Awomolo said the Supreme Court had held in many cases that the purpose of seeking for leave of court to prefer charges was to ensure that frivolous criminal charges were not filed and not to allow the accused persons to see the details of the charges against them.

He said the charges remained valid, adding that non-attachment of witnesses' statement did not vitiate the legality of the charges.

Awomolo cited the Supreme Court's judgment in the case of the Federal Government Vs Adolphos Wabara to support his argument that the leave granted for the trial to commence was proper.

Lawan and Emenalo were said to have violated the provisions of the Independent Corrupt Practices and other related Offences Commission (ICPC) Act.

In count two, Lawan was accused of corruptly asking for $3,000,000 from Otedola with the intention of favouring him (Otedola) in the report of the adhoc committee, an offence punishable under section 8(1) of the same Act.

While in count three, Lawan was said to have corruptly agreed to accept the $3,000,000, count four indicated that he obtained $500,000 from Otedola Otedola.

In the same vein, count five accused Emenalo of asking for$3,000,000 for himself from Otedola as a bribe, an offence punishable under section 8(1) of the ICPC 2000 Act.

The prosecution alleged in count six that Emenalo was offered bribe by Otedola but he failed to report the offer to any officer of the ICPC, an offence contrary to section 23(1) of the ICPC Act, 2000, and punishable under section 23(3) of the same 2000 ICPC Act.

In count seven, Emenalo was equally accused of receiving $120,000 from Otedola .

In an affidavit deposed to by one Chidi Amaeze, he averred that investigation into the criminal case had since been concluded.

Lawan had repeatedly denied Otedola’s accusations, saying he collected the $620,000 as evidence to expose the businessman’s attempts to bribe him.

Lawan and Emenalo had also pleaded not guilty to the charges and had since been admitted to bail by the trial judge, Justice Oniyangi.