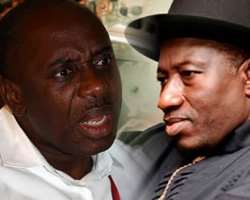 SAN FRANCISCO, May 09, (THEWILL) – The crisis rocking the Rivers State chapter of the Peoples Democratic Party(PDP) has crept into the House of Representatives as members Thursday differed over the occupation of the Rivers State House of Assembly by the Police on the orders of the Inspector General of Police, Mohammed Abubakar.

It is alleged that the Presidency and a faction of the Party in the State led by the Minister of State for Education, Mr. Nyesom Wike, are behind a grand plan to wrestle the party's machinery from Governor Rotimi Amaechi.

Sponsoring a motion under matters of urgent national importance, Hon. Sekonte Davis (PDP-Rivers State), urged the House to order the withdrawal of policemen from the House of Assembly of the State, as he declared that their occupation of the State Parliament was against the principles of democracy.

Sekonte who represents Boni Federal Constituency in the State and is believed to be a member of Amaechi's faction of the PDP, decried "the dictatorial tendencies" of the Presidency and what he said was a deliberate ploy to undermine the authority of the Rivers State Government on matters concerning the State.

But another member from the State, Hon. Kingsley Chinda, believed to be with the Wike -led group countered, insisting that to the contrary, the withdrawal of Police personnel from the Assembly precincts and other parts of the State, would heighten insecurity in the area.

Chinda argued that the National Assembly is empowered by section 4(1) of the 1999 Constitution to intervene on issues for the sake of good governance and peace.

He also called on the House to intervene on allegations that the Rivers State House of Assembly with the tacit approval of Governor Amaechi sacked Local Government Chairmen and replaced them with caretaker committees, against the provisions of the constitution.

Sekonte however got support in Hon. Nnanna Igbokwe(PDP-Imo), who warned the House against the trend of considering issues that were within the legislative jurisdiction of the State Assembly, pointing specifically to the issue of Local Governments, which he said is the discretion of the State Houses of Assembly.

After an exhaustive debate on the matters, Speaker Aminu Tambuwal who presided over the session intervened and ended the debate, as he mandated the House Committees on Rules, Business and Justice to assess the situation and give him advice on the action the House should take.