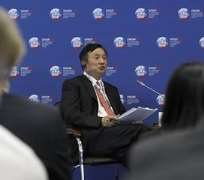 Ren Zhengfei, founder and CEO of Huawei Technologies Co Ltd, defended the Chinese firm's stand on U.S. cyber-security concerns when he spoke to the media for the first time on Thursday, lifting a veil of secrecy surrounding the elusive executive.

Ren has avoided the press since he founded Huawei 26 years ago, which has fueled criticism by some foreign officials that the company is not transparent about its activities. The company has also been accused of being too close to the Chinese government. Huawei has denied any improper links.

"Huawei has no connection to the cyber-security issues the U.S. has encountered in the past, current and future," Ren, 68, told local reporters in New Zealand, where Huawei won contracts to build 4G LTE and ultra-fast broadband networks.

"Huawei equipment is almost non-existent in networks currently running in the U.S. We have never sold any key equipment to major U.S. carriers, nor have we sold any equipment to any U.S. government agency," Ren said.

Shenzhen-based Huawei is the world's second-largest telecom equipment maker, ranking behind Sweden's Ericsson, but it has failed to sell its telecom gear in the massive U.S. market due to U.S. national security concerns.

The $35 billion company, which is also the world's No.5 smartphone maker competing against the likes of Apple Inc and Samsung Electronics Co Ltd, has also been barred from taking part in supplying Australia's and Canada's government networks.

In April, Ren said that he was being transparent to the outside world even though he had never granted any interviews, because articles he had written were readily available on the company's website.

In another effort to be more open, his daughter, Cathy Meng, who is Huawei's chief financial officer, earlier this year hosted her first news conference to announce the company's 2012 results.