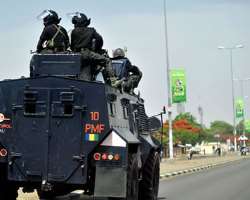 SAN FRANCISCO, May 06, (THEWILL) – The military Joint Task Force (JTF) and the Yobe State Government on Monday agreed to relax the curfew imposed on Yobe State by two hours, saying the curfew will now be enforced between 8pm and 7am.

A statement signed by Alhaji Bego Abdullahi, the Special Adviser on Media and Publicity to the State governor, Ibrahim Gaidam, said: “Following an emergency security meeting with the Joint Task Force (JTF), Police and other security agencies Monday at the Government House, Damaturu, Governor Ibrahim Gaidam has approved the review of 13-hour curfew to 8pmto7am daily, until the security situation further improves.”

Bego said the governor also expressed his appreciation to the people of the state for their support and cooperation with security agents, who, according to him, are working round-the-clock to ensure that peace and security are restored in the state.

Gaidam reminded residents of the state to continue to use the telephone numbers provided by the JTF to report any suspicious movements in their communities and neighborhoods.

“We also remind the good people of the state not to relent in prayers for Almighty Allah (SWT) to restore peace and security in Yobe and the nation in general,” the statement added.