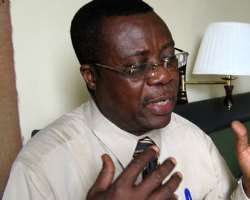 SAN FRANCISCO, May 06, (THEWILL) - Delta State Governor, Dr. Emmanuel Uduaghan has described the late Vanguard columnist, Pini Jason as a consummate writer whose passion for the journalism profession was unmistakable and a source of pride to those who read every week.


In a statement by Felix Ofou, his press secretary, the governor lamented that the celebrated columnist died when his wise counsel and respected foresight on national issues were most needed, while noting that it will be difficult to fill the void left behind by the Imo State born journalist.


"You did not have to agree with everything he wrote. You may even think he was biased sometimes about what he wrote. But you could never miss the fact that he was very passionate about his passion. His sense of history also made him a compelling read. And I dare say he has left a void very difficult to fill", he stated.


Uduaghan expressed heartfelt condolences with the publisher of Vanguard, Dr Sam Amuka, the management and staff of the newspaper as well as the family of the deceased on the irreplaceable loss.


Pini Jason’s death, painful – Ajimobi
Governor Abiola Ajimobi of Oyo State has condoled with the government and people of Anambra State, Governor Peter Obi, management of Vanguard Newspapers and the family of Mr. Jason Onyegbadue, popularly known as Pini Jason, over the death of the veteran columnist, at the age of 65.

The governor, in a statement issued in Ibadan on Monday by his Special Adviser on Media, Dr. Festus Adedayo, described the late columnist as one of the few consciences of the nation, saying that his death was painful.

“Mr. Jason was a fearless writer who never for once hesitated to present issues as they were. He was always on the side of the truth and he never wavered in defending the course of the ordinary Nigerian,’’ he remarked.

Governor Ajimobi noted that for several years, Mr. Jason used his column to put government on its toes and offer constructive criticism on government’s programmes and policies with a view to putting it back on track.

“Mr. Jason would be particularly remembered for his humility and passion for his chosen profession,’’ he said, adding that his death had rubbed the country of a man who used his pen for the improvement of the society.

The governor said that rather than mourning him, Mr. Jason should be celebrated for living a fulfilled life and for using his intellectual endowment for the betterment of the society.

Former Vice President Atiku Abubakar has described the death of the Vanguard newspaper's veteran columnist, Mr. Pini Jason Onyegbadue, as another "haemorrhage of distinguished professionals that has befallen the country at large and journalism in particular."


In a statement issued on his behalf by his media office in Abuja on Sunday, the former Vice President said the late columnist had distinguished himself as a fearless writer that never hesitated to be on the side of what was right, regardless of whether it was pleasing to the ears of the powers that be or not.


According to Atiku, whether you agreed with the late Jason or not, you must not fail to respect his courage of conviction and the bluntness with which he expressed those convictions in his servings in his Vanguard column.


The former Vice President also commended the extraordinary humility of the late Mr. Jason and the passion with which he was committed to his trade.


He recalled that the deceased returned to his column writing after serving in the administration of former Governor Ikedi Ohakim of Imo State, saying that few Nigerians would have demonstrated such humility once they had scented the aroma of power.


He extended his condolences to the family of the late distinguished columnist and the Vanguard newspapers.