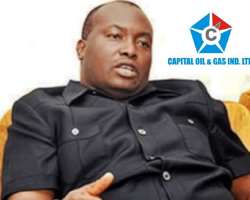 
Mr. Ubah was interrogated for hours at the EFCC facility in Abuja by operatives of the commission as part of the EFCC’s investigations into the multi-billion-naira fuel subsidy scam.


EFCC spokesman, Mr. Wilson Uwajaren told THEWILL that Mr. Ubah was questioned on his role and that of his company, Capital Oil, in the fuel importation scam.