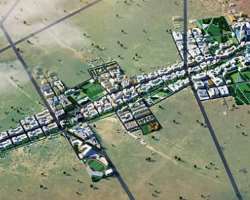 The country that gave the world two groundbreaking innovations in technology: M-Pesa, a mobile banking system, and Ushahidi, a platform for crowdsourcing information during disasters, is now taking its technological talents to new heights. The East African nation of Kenya has just started construction on a 5,000-acres piece of land in Konza, about 60km south of Nairobi, to turn the savannah area into “the most modern city in Africa”.

The Konza techno city project is the brainchild of Bitange Ndemo, Kenya’s permanent secretary in the ministry of information and communications. “Rather than echo a smattering of tech parks and business centres starting up on the continent,” says theFinancial Times, “Kenya envisions a broader city-from-scratch to bring research universities, industry and government together, along the lines of Silicon Valley”.

The Wired magazine reported that Konza’s development “plan is extremely ambitious” and is “not just seen as a way of attracting investment from international tech companies and inspiring domestic entrepreneurs, but also as a way of reducing the corruption that has been endemic in the nation for several decades.”

Konza is expected to cement Kenya’s role as a regional technology leader in Africa. With a well developed technology sector, Kenya became the first country in Africa to open its government to the public by making millions of pages of internal governments documents available online. The country’s M-Pesa cell phone banking service is now being used all over the world for purchases and money transfers, and according to the US Time magazine, Ushahidi has been used “in 128 countries to map everything from [the 2010] earthquake in Haiti to [the] Japanese tsunami and the Arab Spring.”

The unveiling of the Konza project is being seen as a natural progression of Kenya’s aspirations to attract corporate investments in technology. In 2012, IBM set up its first African research lab in Nairobi, joining renowned American companies like Google, Microsoft and Intel that have their regional headquarters Kenya. Konza is heavily-influenced by similar “new cities”, like Cyberjaya in Malaysia, Cyber City in Mauritius and Egypt’s Smart Village, says the Wired.

The project is expected to cost $10 billion and create more than 200,000 jobs when completed in 2030. There are plans for an electronic manufacturing plant, an international financial centre and a convention centre. The government is offering tax breaks to companies as an incentive to move and invest in Konza.

Amid the euphoria and excitement over the prospects for Silicon Savannah, there have been some voices of caution. Technology experts at the Mobile Web East Africa conference held in Nairobi in February warned Kenya’s technology industry against copying the Silicon Valley business model. Their concern was that most of the companies being formed in Kenya were based on a single app or software programme.

“Kenya should be more of a ‘Digital Savannah’ and not ‘Silicon Savannah’, says TMS “Teddy” Ruge, co-founder of Project Diaspora USA/Uganda, an organization that mobilizes resources from Africans in diaspora to invest in Africa, “We are yet to manufacture things here, and most of the companies we have here are based on digital solutions.”

Kenya’s reputation as a technology leader in Africa suffered an embarrassing setback during the March national elections when both a biometric ID system designed to avoid multiple voting and an electronic transmission system to speed up vote counting broke down. The country’s independent electoral body was forced to switch to counting votes manually, slowing down the process and causing national anxiety.

Notwithstanding, Konza appears to be proving skeptics wrong. So far, more than a dozen companies are expected to start setting up operations in Konza.

“Konza will become a game-changer in Kenya’s socio-economic development, spurring massive trade and investment across the entire region,” said President Mwai Kibaki at the groundbreaking ceremony held in January at the proposed new city.