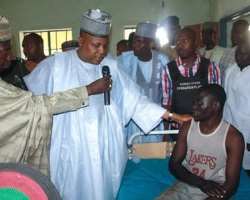 BORNO STATE GOVERNOR KASHIM SHETTIMA (C) VISITS INJURED VICTIMS OF HEAVY FIGHTING AT A HOSPITAL IN BAGA, IN THIS APRIL 21, 2013
Listen to article

A joint force of more than 100 was assembled after an intelligence report said militants from the Boko Haram militant group had moved into Baga, a fishing town in northeast Nigeria on the shores of Lake Chad, two Nigerian military sources, a senior officer from Niger and a Chadian military official said.

The operation - possibly one of the deadliest since Boko Haram launched its insurgency in 2009 - highlights the shared concerns of West African nations that growing links between jihadist groups in the Sahara desert are a threat to their national security.

Neighboring countries were alarmed last year when Islamists took over vast parts of Mali before French forces pushed them out.

"It's clear that all the governments of the region are scared to death of Islamic radicalism, so it would be natural to cooperate," said John Campbell, a former U.S. ambassador to Nigeria and now a fellow at the Council on Foreign Relations.

He had earlier said that "the force that hit them was a multinational force" of troops from the three nations, but he later said that meant only that the Nigerian troops involved were themselves part of a joint border patrol.

However, a senior officer from Niger said 120 soldiers from the three countries based near Baga had joined in the "violent combat". A Chadian official also said their troops had helped. The sources spoke on condition of anonymity because of the sensitivity of the subject.

There was no confirmation of the death toll from Friday's fighting, but a Nigerian military source said dozens may have died, many of them civilians. The Nigerian Red Cross said it was checking reports from locals that 187 people had died, but had still not obtained security clearance to go into Baga.

Several Boko Haram fighters were killed and weapons were seized, but the sources said the battle was neither a significant strategic victory nor a major escalation.

"Apart from those who were hit by gunshots, many people were burnt in their houses. There were even corpses of some people in the bush," he said.

QUESTIONS OVER DEATH TOLL, AMNESTY
Nigerian President Goodluck Jonathan has set up a panel to work out an amnesty offer for the insurgents if they give up their struggle. Boko Haram has so far shown no interest in talks, but some analysts are optimistic.

"By putting this on the table, you are introducing a political dimension that hadn't been there before. It's a starting point for a possible conversation," Campbell said.

Defense spokesman Olukolade gave the death toll as 30 Boko Haram militants, six civilians and one soldier, and said weapons including RPGs had been seized.

A Nigerian military source said it was a lot higher.

"A lot of houses got burned, mostly from RPG fire. Civilians were caught in the crossfire. A lot people died, dozens," he said, denying an accusation by a community representative that the army had set fire to people's homes.

A large civilian death toll is like to fuel further criticism of the Nigerian military, accused by many locals and rights groups of being heavy handed and failing to protect innocent bystanders. The military blames the Islamists for hiding among civilians.

A spokesman for U.N. Secretary General Ban Ki-moon said he was "shocked and saddened at reports of high numbers of civilians killed". Borno state Governor Kashim Shettima also expressed concern over civilian deaths, which he called "gruesome and highly condemnable."