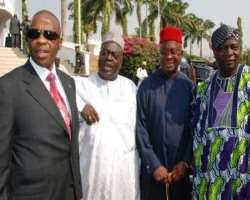 RE: Jonathan, Govs in Secret Deal
The attention of the Nigeria Governors' Forum (NGF) has been drawn to a totally misleading and mischievous publication in the Punch Newspapers of 13th February, 2010, captioned "Jonathan, Govs in Secret Deal". This publication alleges, among other things that the Governors only resolved to urge the leadership of the National Assembly to formally recognize the Vice President as the Acting President after a promise to release $2 billion to the Governors from the Excess Crude Account (ECA). A few other publications and some online channels have latched on to this and recycled the same falsehood. We wish to state that these reports are false, mischievous and ill-informed.

On the 4th of February, an emergency meeting of the Nigeria Governors Forum was convened to deliberate on what was obviously becoming a political and constitutional impasse. As responsible leaders of the collection of 36 states that make up our Federation, we clearly had a role to play in resolving this situation.

After a thorough deliberation, members unanimously agreed to urge our distinguished Senators and honourable members of the House of Representatives to pass a resolution to enable the Vice President Goodluck Jonathan formally take position as the Acting President.

This decision, which was taken solely in the interest of the nation and the desire to protect our emerging democracy closely aligns with suggestions earlier made by leading statesmen, activists, and other opinion leaders, in resolving the difficult situation. Given the turn of events in the last two months in our country, Governors believed that the position we took was the most practicable in the circumstances and we are delighted to note the wave of relief that has swept through the country since that action was taken. It is therefore, most unfortunate for a newspaper to undermine the significance of this moment in our history by attributing it to pecuniary benefits.

For the avoidance of doubt, we wish to state that Funds in Excess Crude Account (ECA) belong to the three tiers of Government: Federal, States, and Local Governments. Therefore, States would have no special benefits or interests in requesting that funds in the ECA be disbursed since the three tiers of government benefit collectively from such disbursements.

The request to share another tranche of the excess crude funds was discussed at the last meeting of the National Economic Council (NEC) held as far back as January 12, 2010. At that meeting, the point was made that since it had been generally agreed that the excess crude account will be accessed during the year, this was the appropriate period during the dry season to deploy funds in support of construction work around the country rather than later in the year when campaigns for the 2011 elections would have kicked off at all levels of government in the country. It was also noted that the shortfall in revenue accruing to the Federal, States and LGs as a result of the use of the 2009 budget crude oil benchmark of $45 per barrel as against $60 per barrel in the 2010 budget (since the Appropriation Bill had not been signed) could be augmented by accessing the ECA funds right away.

The standing sub-committee of the NEC comprising the CBN Governor; the Honorable Ministers of Finance; the Economic Adviser to VP and representative of the Governors and others was directed to review this request and make recommendations on the amount to be released and benefit of such release

The Committee met on the 19th January, 2010 and unanimously recommended that $3 billion be accessed and shared to all the beneficiaries immediately.

However, upon further consultation, the Acting President approved $2 billion. But as the practice the distribution must wait till the next Federation Account Allocation Committee (FAAC) which held on Thursday and Friday, 11th and 12th February, 2010.

The Excess Crude Accounts had been accessed on several occasions in the past. This request for disbursement from the account is not in any way out of the ordinary, and it has followed the same procedures as in the past. Therefore, attempting to link this routine fiscal relationship issue to the genuine and patriotic efforts to resolve one of the most difficult challenges that our democracy has faced in recent years is simply unfortunate.

Our decision did not have to be negotiated or induced. In taking that decision, everyone of us rose above party, personal or sectional interest to achieve a consensus on Nigeria. As State Governors, we are proud of the role we have played in resolving this situation, which has been hailed across the world as yet another testimony that our democracy has come of age and that we Nigerians have the capacity to resolve our political problems peacefully and constitutionally.

We believe that neither our media nor our country is ennobled by journalism that constantly seeks to undermine and cast aspersions on the genuine and patriotic efforts of our leaders at serving our country and moving it forward. Therefore, we once again call on editors and media managers to be wary of false and speculative reports that some of their reporters often disguise as facts in the name of digging up the news behind the news. We believe that more than ever before, this is the time we must all be committed to the task of doing only that which edifies and honours our country and its people.