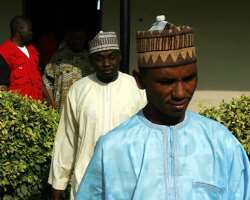 SAN FRANCISCO, April 18, (THEWILL) – The Economic and Financial Crimes Commission, EFCC, has arraigned Abubakar Sadiq Maigaskiya and Mustapha Buhari before Justice Dije Abdu Aboki of Kano High Court on 10- count charge of conspiracy and forgery. The third accused person, Haruna Dahiru Bindawa could not be arraigned due to ill-health while the fourth accused person, Tukur Hamisu Gwadabe is still at large.

The four suspects are alleged to have conspired among themselves to collect 3000 bags of rice valued at N27,900,000 (Twenty Seven Million, Nine Hundred Thousand Naira) from Rahnas Enterprise on the strength of documents from Bindawa Local Government Employees Union and a payment undertaking from Mainstreet Bank.

One of the charge reads; “That you Abubakar Sadiq Maigaskiya, Mustapha Buhari, Haruna Dahiru Bindawa and Tukur Hamisu Gwadabe (now at large) sometimes in 2012, at Kano within the jurisdiction of High Court of Justice of Kano State, did conspire among yourselves to commit an unlawful act to wit; obtaining property by false pretence and you thereby committed an offence punishable under section 1 of the Advance Fee Fraud and Other Fraud Related Offences Act, 2006.”

Counsel to EFCC, Aisha Tahir Habib then asked the court to fix a date for hearing in view of the plea of the accused persons. Counsel to the first and second accused persons sought to move an application for bail.

However, Justice Aboki adjourned the case to 13th May, 2013 for hearing and ruling on the bail application while ordering that the accused persons be remanded in prison custody.