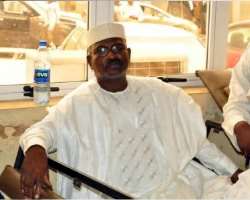 
The suspects were arraigned on an amended 18 count-charge of criminal breach of trust and conspiracy involving the sum of N46 billion belonging to the Police Pension Funds.


The 18-count (amended) charge is punishable under sections 97 and 315 of the Penal Code Act Cap 532, Laws of the Federal Capital Territory.

One of the suspects, who was absent during the previous arraignment of the other suspects, Mrs. Uzoma Cyril Attang, took her plea Wednesday.

"Attang who was absent in court when the others were first arraigned, was in charge of the police pension fund when N7.8billion was stolen through 10,863 cheques. She was also discovered to have personally signed 1,042 cheques to the tune of N1, 141,309,080.25.

They had earlier been arraigned alongside convicted pension thief, John Yusuf, before Justice Mohammed Talba.

However following the public outcry that greeted the sentence meted out to Yusuf, the Economic and Financial Crimes Commission decided to withdraw the prosecution of the remaining suspects from Justice Talba.

Justice Talba had sentenced Yusuf to two years imprisonment but gave him the option to pay N750,000 fine, a sentence that angered the nation and drew uncomplimentary remarks against the nation's judiciary in the fight against corruption.

According to count one of the amended charge , the suspects allegedly conspired and agreed, between January 2008 and June 2011, to do an illegal act, to wit: criminal breach of trust in respect of the sum of N20.155 billion, an offence punishable under section 97 of the Penal Code Act, Cap 532, Laws of the Federal Capital Territory, Abuja. Nigeria 2007.

The accused persons pleaded not guilty to all the charges.

The court subsequently fixed their trial for June 3 and 4.

The judge ordered that the bail granted the accused persons by the former judge should continue to run in so far as they had complied with the bail conditions.

"In the same vein, the 6th accused (Attang) is granted bail on the same terms and conditions with other accused persons," the judge said , even as the prosecuting counsel, Mr. Rotimi Jacobs (SAN), decided not to oppose bail application, bearing in mind the fact that the case was transferred, thus clearing the coast for temporary freedom for the accused.