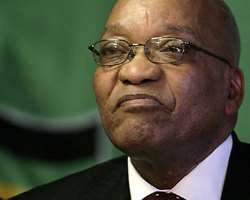 The South African force was involved in a nine-hour firefight with thousands of rebels who poured into Central African Republic's (CAR) capital Bangui last month and seized control of the country, which has rich deposits of gold, diamonds and uranium.

Zuma has faced enormous pressure over the 13 South African deaths - the worst military setback since the end of apartheid in 1994.

South Africa's opposition is calling for a parliamentary investigation and domestic media are speculating that the troops were defending investments made by Zuma's ruling African National Congress (ANC).

The deaths have touched a nerve with a public not used to seeing flag-draped coffins being carried off planes, with many asking why Zuma sent troops to a country 3,500 km (2,200 miles) away and outside South Africa's normal sphere of influence.

Zuma said the 200 troops sent in December were "heroes" sent to uphold South Africa's foreign policy and were protecting a deployment of military trainers sent in 2007 under a military cooperation agreement.

"Let me emphasize that we reject any insinuation that these soldiers were sent to the CAR for any reason other than in pursuit of the national interest and the interests of the African continent," he said at a memorial for the soldiers.

"We will not be side-tracked by those who are on a perpetual campaign against this democratic government," said Zuma, who is due to attend a regional summit in Chad this week to discuss the political crisis in CAR, a former French colony.

"The plan had two other elements, which, if implemented, would give Inala and its ANC-linked shareholders complete dominance of CAR's diamond market," the paper said.

The ANC dismissed the report as "blatant lies".
"The ANC as an organization does not have business interests in CAR," it said in a statement.

South African soldiers said they were traumatized after learning that many of the rebels in the battle in Bangui were child soldiers, South African newspapers the Sunday Times and City Press reported at the weekend.

"The rebels stormed our soldiers in groups, not at all like trained soldiers, and many of them were only children," City Press quoted one soldier as saying.

Troops ran out of ammunition for rifles and had to fire rocket-propelled grenades to repel the attacks, City Press said. Defense officials have not commented on specifics of the reports but said troops were adequately supplied.