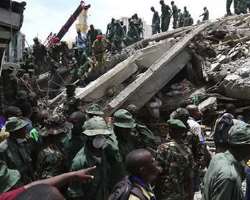 The death toll from the collapse of a multi-storey building in Tanzania has risen to 34 after more bodies were pulled from the rubble, a senior government official said on Monday.

Rescue workers at the site in a district in the commercial capital Dar es Salaam have now cleared most of the debris and reached the basement of the building that caved in on Friday morning. It is likely more bodies could be found.

Tanzania's buoyant economy has fuelled a building boom, especially in Kariakoo and the city center. But the speed of construction has raised concerns about safety standards.

"The bodies being recovered now have started to decompose...so we want to conclude this exercise as soon as possible to allow funeral arrangements to take place."

The building of more than 12 storeys had been under construction near a mosque in the Kariakoo district near the city center. Several cars were crushed and boys playing football nearby were among the dead.

Police said four people had been arrested over the incident.

He said those responsible would face criminal charges.