Oga at the top movie debuts 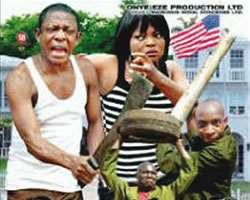 Call it the director's creativity or mischief, the movie, Oga at the top, is out. Quite similar to the viral 'Oga at the top' quote, the movie features popular Nollywood actor, Nkem Owoh, also known as Osuofia.

Although the viral quote stopped trending on Twitter after a week of dominance, Nigerians put their creativity to test as they made T-shirts, mugs, songs and jokes about the error made by the Lagos State Commandant of the Nigerian Security and Civil Defence Corps, Obafaiye Shem, during an interview on Channels Televison.

Efforts to reach Osuofia proved futile as his mobile phone was switched off when Saturday Beats tried to reach him. He did not also reply to a text message sent to his phone