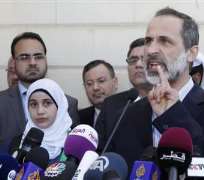 A Syrian opposition bloc recognized by the Arab League as the sole representative for Syria opened its first embassy in Qatar on Wednesday in a diplomatic blow to President Bashar al-Assad.

But opposition leader Moaz Alkhatib, who took Syria's seat at an Arab summit in Doha on Tuesday, used the ribbon-cutting ceremony to voice his frustration with world powers for failing to do more to help in the two-year-old struggle to topple Assad.

"There is an international willingness for the revolution not to triumph," he told reporters at the embassy, which was festooned with balloons in the red, green, white and black of Syria's national flag.

Alkhatib, a Sunni Muslim cleric who resigned this week as leader of the Syrian National Coalition, but who is staying on as a caretaker, also alluded to internal differences plaguing the opposition umbrella group formed in Qatar in November.

"The only way to victory is unity," he declared.
Damascus raged against summit host Qatar for helping the opposition into Syria's seat at the League, while Russia and Iran also criticized the move to delegitimize Assad's rule.

Yet although the 22-member Arab bloc lent its support to giving weapons to Syrian rebels, it is unclear how much impact the opposition's diplomatic advances will have inside Syria.

The Cairo-based coalition's control over insurgent groups is tenuous at best. Some of the most militarily effective, such as the al Qaeda-linked Nusra Front, openly reject its authority.

Alkhatib told Reuters in an interview he was surprised by a rebuff from the United States and NATO to his request for Patriot missiles based in Turkey to help protect rebel-held parts of northern Syria from Assad's helicopters and warplanes.

"I'm scared that this will be a message to the Syrian regime telling it 'Do what you want'," he said.

OPPOSITION DISUNITY
NATO Secretary-General Anders Fogh Rasmussen, speaking to students in Moscow via video link from Brussels, again said the Western alliance had no intention of intervening in Syria.

"We believe that we need a political solution in Syria," he said, noting there was no U.N. mandate for NATO action there.

Disunity among Syria's opposition in exile and the armed factions on the ground have long hindered the struggle against Assad and have contributed to Western reluctance to intervene.

Alkhatib has cited the West's failure to do more to help the opposition, as well as the coalition's internal divisions, as reasons for announcing on Sunday that he would quit as leader.

He offered no clarity on his own political future in his interview with Reuters. "I have given my resignation and I have not withdrawn it. But I have to continue my duties until the general committee meets," the former mosque imam said.

The Arab summit's support for Assad's foes may prove more symbolic than practical, but Syria vented its wrath at Qatar for its pro-opposition actions at the annual gathering.

"The emir of Qatar, the biggest bank for supporting terrorism in the region, began his presidency of the Arab League by hijacking it with tainted oil and money," said state news agency SANA, a mouthpiece for Assad's government.

Qatar's Sheikh Hamad bin Khalifa al-Thani "committed a flagrant violation of the League's pact by inviting the deformed body, the 'Doha Coalition', to usurp Syria's seat in the League", SANA said, in a scathing reference to the opposition.

Qatar has funded political opposition groups and is believed to be funneling money and weapons to rebels in Syria.

Russia, which gives Damascus military and diplomatic support, scolded the Arab League for taking "another anti-Syria step" by giving Syria's seat to the opposition.

Arab nations are far from united on Syria, with Algeria, Iraq and Lebanon often opposing any action against Assad's rule.

Saudi Arabia, Qatar and some others have thrown their support behind the mostly Sunni Muslim rebels in Syria, partly to weaken Shi'ite Iran, the main regional ally of Assad, whose minority Alawite sect is distantly derived from Shi'ite Islam.

Iran, which has sent advisers, money and weapons to help Assad stay in power, also lambasted the Arab League for allowing a foe of Assad to take Syria's seat at the summit, calling this "a pattern of dangerous behavior".

Iran views Assad as a pillar of an "axis of resistance" against Israel and a bulwark against Sunni militants in Syria, a country which for three decades has been the main conduit for Iranian arms supplies to Lebanon's Shi'ite Hezbollah movement.