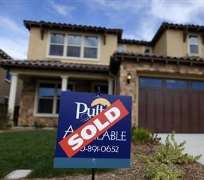 Home resales hit a three-year high in February and prices jumped, adding to signs of an acceleration in the housing market recovery, even though the supply of properties on the market increased.

The National Association of Realtors said on Thursday existing home sales increased 0.8 percent to an annual rate of 4.98 million units last month, the highest level since November 2009. The January sales pace was revised up a 4.94 million units from the previously reported 4.92 million units.

Economists polled by Reuters had expected home resales to rise to a 5 million-unit rate. Homes took about 74 days to sell in February, according to the median estimate, down from 97 days from a year ago.

The rise in sales last month was the latest indication that the housing market was gaining more ground. Data this week showed builders broke ground on more houses in February and permits for future construction approached a five-year high.

"With buying conditions remaining very supportive to demand and overall economic fundamentals continuing to improve, we expect the momentum in housing activity to improve further, providing a supportive backdrop for the recovery more generally," said Millan Mulraine, a senior economist at TD Securities in New York.

A very accommodative monetary policy by the Federal Reserve, which has held mortgage rates near record lows, is helping to lift the housing market off the floor and lending the economy much needed support.

The U.S. central bank on Wednesday acknowledged the firming housing market tone, but decided to continue to buy $85 billion in mortgage and Treasury bonds per month, citing the risks to the economy from tighter fiscal policy and renewed financial problems in Europe.

Last month, the inventory of unsold homes on the market increased 9.6 percent to 1.94 million. That represented a 4.7 months' supply at February's sales pace, up from 4.3 months in January, the first increase since April. Inventories typically rise in February.

Still, the months' supply remained below the 6.0 months that is normally considered as a healthy balance between supply and demand.

The U.S. housing market had been held back by an overhang of unsold homes. Since surging in August, home resales have only increased modestly, an indication that tight supplies in some parts of the country are constraining sales.

Economists believe these dwindling supplies of previously occupied homes for sale could push buyers into the new homes market where sales have been lagging.

Distressed properties, foreclosures and short sales, which typically occur at deep discounts, accounted for a quarter of overall sales last month, up from 23 percent in January.

Investors bought 22 percent of homes in February, with first-time buyers accounting for 30 percent of the transactions.