DAVID MARK'S SENATE AND THE CHALLENGE OF STABILIZING NIGERIA 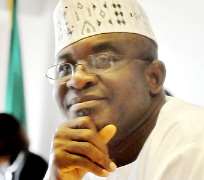 In 2007 when Senator David Mark became the Senate President, political pundits thought his military background would have a telling effect on his leadership of National Assembly in general. The feeling then was that another bully had mounted the saddle; this time, in the legislative arm of government; this stems from the belief that during Obasanjo’s era as the President of Nigeria, he was perceived as been dictatorial in administering the State-Nigeria.

Seven years down the line, the Senate of the Federal Republic of Nigeria has proved skeptics wrong from the perspective of performing their function as a stabilizing institution in Nigeria. One thing is clear here about the leadership of Senator Alechenu Bonaventure Mark. Contrary to the fears of Nigerians that his era as Senate President will be characterized by dictatorial inclinations, what Nigerians are seeing is a rather issues based Senate and pragmatic leadership style. Although, there were occasions Nigerians saw National Assembly as anti- people, by extension, anti-development in Nigeria. A case in point here is when the Governor of Central Bank of Nigeria, Sanusi, Lamido Sanusi, accused them of cornering 25% of Nigeria budget funds to themselves. The response of David Mark’s Senate leadership was swift as it invited the CBN Governor to come and shed more light on his allegation. This he satisfactorily did.

There is no doubt that Nigerians see the House of Representatives as been more vibrant than the Senate in terms of taking side with the masses on critical National issues. For instance, during the petroleum subsidy crisis that almost paralyzed the economy of Nigeria, the House of Representatives call off their recess and sat on Sunday to deliberate on the raging crisis then. Though, their intervention did not have much effect on the resolution of the subsidy crisis eventually. It is on record that Senate, under David Mark’s leadership embarked on shuttle diplomacy in bringing the problem to an end. Legislative analysts believed that what the two arms did under the circumstance they found themselves was right. They are of the opinion that the lower chamber acted the way they did because of age factor. They must necessarily be vibrant because their age permits that, they reasoned. Justifying why the Senate did not join the House of Reps. to pile pressure on the executive arm of government to rescind their decision on the fuel price hike, the legislative analysts said that by the reason of their age, maturity and experience, they can only apply diplomacy in resolving the problem.

Perhaps, the Doctrine of Necessity David Mark’s Senate applied in making Vice President Goodluck Jonathan as he then was, the Acting President of Nigeria, could be regarded as the greatest achievement of Senate of the Federal Republic of Nigeria as an institution. Though, this line of thinking has been faulted by Constitutional experts. They believe that the Constitution of Nigeria is explicit on what should happen if the President is sick or incapacitated in any way, and as such, credit should not be given to the Senate for bringing about the Doctrine of Necessity that eventually brought about stability in Nigeria. But on a balance of scale, credit must be given to the Senate because as things were then, none of the appointees of Late President Yar’Adua could pronounce the President incapacitated, at least from the point of view of geo-political dichotomy in Nigeria. In the first place, the late President absence afforded his appointees the needed opportunity to help themselves to the treasury of the nation. Secondly, the appointees will not like to lose their job as full disclosure of what was wrong with late Yar’Adua will automatically earn them sack from the cabinet, by the new President, or so they thought.

It was not surprising to see the tactical booting out of Professor Dora Akuyili from the administration of President Good;uck Jonathan because of her half hearted call on other cabinet members to tell the Nation the truth as regards late President Yar’Adua’s true state of health. In a nutshell, it was politically expedient for members of late Yar’Adua’s cabinet not to disclose the nature of his illness from AkuyiIi’s experience. Based on real or imagined fear of what awaits them if they tell the public the truth about their President, and the vexed issue of North/ South dichotomy in Nigeria; David Mark led Senate was dead right in the DOCTRINE OF NECESSITY that empowered the President Goodluck as the Acting President then. The Nation was thus saved the trauma of uncertainty and bleak future.

Once again, a thorny issue has cropped up in the National Assembly. This time, the problem is the Petroleum Industry Bill [PIB]. Senator David Mark’s Senate has again, proved skeptics wrong by putting the stability of Nigeria above any other consideration. Currently the bill has scaled second reading at the Senate. Before now, the bill had let to division of the National Assembly along North/ South divide. Even there was the fear in the South that the Senate President will align with his brothers in the North to frustrate the bill, seen in some quarters as anti- north. So far, Senate President has proved to all in Nigeria that he is a core Nationalist. He has demonstrated a strong belief in the unity of Nigeria. I think he deserves commendation here. The task before David Mark’s Senate is therefore to use the current Constitution amendment to strengthen Local Government Institution to really take democracy and development to the grass-root.

Indeed, the Senate as an institution has performed its function as stabilizing institution in Nigeria, the tempo should be maintained.