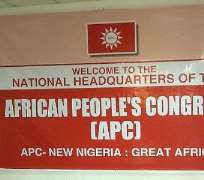 SAN FRANCISCO, March 15, (THEWILL) - The African People’s Congress (APC) Friday said it has uncovered plots by some faceless persons believed to be inspired by desperate elements in the oppositions merger group to attack and possibly eliminate key officers.

The ‘new political party’ with the same Acronym (APC) as that of the oppositions’ yet to be registered All Progressive Congress, in a statement said the plot “came to light barely twenty four hours after APC, its National Headquarter, logo, manifesto and constitution were unveiled to Nigerians and indeed Africa.”

A statement emailed to THEWILL by the APC’s Ag. National Secretary, Barr. Sa’id Balogun reads in part, “After the elaborate event and appraisal meetings and stakeholders’ interactions that followed at the National headquarter, most officers of the party left the secretariat late yesterday. At about 10.15pm when an officer of the party, Hon Dan Iloabanafo and some administrative staff were getting ready to close the Secretariat for the day, two men came round the backside of the office claiming they wanted to register as members of the party, a feature that has become common place in the secretariat, but Iloabanafo advised them to come back the next day or any other week day. The hoodlums insisted they preferred to be registered immediately, and while the party officer was trying to explain things to them, they pulled out guns and demanded the whereabouts of the Acting Chairman who had left the Secretariat earlier.

“After moving from one office to the other and satisfying themselves that the Acting Chairman was not in the office, the gunmen left, muttering words that were barely audible but suggested that there were other highly placed persons complicit in the plot but preferred to be kept out of the plot.

“Against this backdrop, the APC wishes to reiterate that no amount of intimidation or harassments can deter it from pursuing its lofty goals and aspirations in the interest of the good people of Nigeria.

“We are too busy to engage in hollow exchanges as initiated yesterday by Chief Tom Ikimi, who fruitlessly shopped for excuses, claims and assertions to justify their failures and political inadequacies.

“As the “assemblage of windpipes” which the merger group represents, Ikimi rushed off to the press on learning of the unveiling of the APC and our firmness of purpose; to ventilate a most pedestrian assertion’ such that can only be expected of school-age children or demented teenagers.

“As their helter-skelter search for means to undermine the APC continues, we wish to alert Nigerians of their grand plot of smuggling a back-dated application for registration into the INEC, an action that could plunge Nigerian democracy into the woods of lawlessness. For APC, that is most unacceptable.

“It is indeed pathetic that same people that claim to pursue the deepening of democracy cannot abide by the letters of the constitution and due process.

“While the merger racketeers continue to fiddle, the APC leadership would be paying a visit to the victims of the Madalla bomb blast this weekend as an expression of our people-centred objectives.

“In anticipation of the issuance of our certificate of registration, a meeting of National Officers of the party would hold at the party headquarters next week to commence mobilization and sensitization of Nigerians preparatory to the launching of our about to be registered party.”