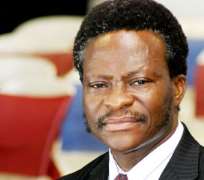 A statement from the Office of the Secretary to the Government of the Federation said his sack takes effect from March 12, 2013.

“Dr. Goodluck Ebele Jonathan, GCFR, President of the Federal Republic of Nigeria, has approved the removal of Dr. Harold Olusegun Demuren from Office as the Director General of the Nigerian Civil Aviation Authority (NCAA) with effect from 12th March 2013. â€¨

“This is consequent to a careful consideration of Dr. Demuren’s unsatisfactory response to the numerous concerns of stakeholders in the Aviation Sector. Mr. President wishes him well in his future endeavours, the Monday night (local time) statement said.

Nigeria’s main airport in Lagos has suffered series of embarrassing power cuts lately and it is believed Demuren may have been removed partly because of this.