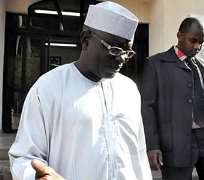 SAN FRANCISCO, March 04, (THEWILL) – A convict who is facing trial in the multi-billion Naira pension scam, John Yahaya Yusufu, caused a stir in court, Monday, as he slumped in the dock while proceedings were on-going.

The incident however led to the adjournment of the proceedings to April 22 while ruling on his bail application was fixed for March 11.

Currently standing trial for alleged false declaration of assets, Yusufu is being prosecuted for not disclosing his interest in a N250 million fixed deposit which was placed at Zenith Bank International Plc. in the name of a company, SY-A Global Services Limited, incorporated by him and solely owned by him and members of his immediate family .

He is allso alleged to have a N10 million fixed deposit in an account his company maintains at First Bank of Nigeria Plc and another N29 million fixed through one Mr. Danjuma Mele, who is also expected to testify as a witness in the trial.

Yusufu's lawyer, Mr. Maiyaki,had moved an application for his bail, saying the offence for which Yusufu is standing trial is ordinarily bailable and that the court is empowered by the law to exercise discretion in granting bail to an accused person and urged that the discretion be exercised in his client's favour.

However the application was opposed by the Economic and Financial Crimes Commission (EFCC)'s lawyer, Mr. Rotimi Jacob, a senior advocate of Nigeria, who asked the court to take into cognizance the recent conviction of the accused on the charge of criminal breach of trust which clearly shows that Yusufu's antecedent does not encourage the court to exercise its discretion in his favour.

Jacob also maintained that Yusufu did not deny his previous conviction on criminal breach of trust in the affidavit he filed in support of his application for bail and urged the court to consider the gravity of his present offence, which is felony, an offence punishable with imprisonment term of five years, as the proof of evidence filed alongside the charge, and to deny him bail.

He further told the court that it is in the interest and safety of the accused person to be kept in custody to prevent the possibility of being mobbed by some aggrieved members of the public who are seriously aggrieved about the seeming mildness of the sentence imposed on him upon his earlier conviction of criminal breach of trust.

The court, after listening to both lawyers, decided that Yusufu's trial should go on while a date should be fixed for ruling on his bail application.

This was unsuccessfully protested by Yusufu's lawyer who suggested that the matter be adjourned for ruling on the bail application before the substantive trial can commence. The court insisted on going ahead with the trial which had been specifically scheduled for Tuesday..

EFCC lawyer then called his first witness, a Mr. Mustapha Sani., to testify against the accused. But sooner had Sanni commenced his testimony than Yusufu, who had been standing in the dock, started shaking violently.

His lawyer pleaded with the court to allow the accused person sit down, a request that was promptly granted by the court but as the accused made to sit down on the seat inside the dock, he slumped forward across the wooden dock.

His lawyer and prison officials who had brought him to court from Kuje prison rushed to him and assited him to sit on the seat.

At this juncture, the court indicated that the accused was not fit to continue with the trial. The trial was therefore adjourned to April 22 while ruling on his bail application was fixed for March 11.

.
His lawyer requested that Yusufu be allowed access to his personal physician for urgent medical attention. The court agreed to that and directed the Prison authority to allow Yusufu have access to his doctor.