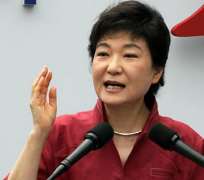 South Korea's new president Park Geun-hye urged North Korea on Monday to abandon its nuclear ambitions, and to stop wasting its scarce resources on arms, less than two weeks after the country carried out its third nuclear test.

Park, the 61-year-old daughter of South Korea's former military ruler Park Chung-hee, met with the father of North Korea's current ruler in 2002 and offered the impoverished and isolated neighbor aid and trade if it abandoned its nuclear program.

"I urge North Korea to abandon its nuclear ambitions without delay and embark on the path to peace and shared development," Park said after being inaugurated on Monday.

Park, usually an austere and demure figure in her public appearances, wore an olive-drab military style jacket and lavender scarf on Monday and smiled broadly and waved enthusiastically as a 70,000 strong crowd cheered her.

Rap sensation Psy was one of the warm up acts on an early spring day outside the country's parliament and performed his "Gagnam Style" hit, but without some of the raunchier actions.

Park's tough stance was supported by the partisan and largely older crowd at her inauguration.

"I have trust in her as the first female president ... She has to be more aggressive on North Korea," said Jeong Byung-ok, 44, who was at the ceremony with her four-year-old daughter.

North Korea is ruled by 30-year-old Kim Jong-un, the third of his line to hold power in Pyongyang and the grandson of a man who tried to assassinate Park's father.

The North, which is facing further U.N. sanctions for its latest nuclear test, which was its biggest and most powerful to date, is unlikely to heed Park's call and there is little Seoul can do to influence its bellicose neighbor.

Park's choices boil down to paying off Pyongyang to abandon its nuclear weapons plan, which would cost hundreds of millions of dollars and failed in 2006 when the North exploded its first nuclear bomb. Alternatively, Seoul could try to further isolate the North, a move that resulted in the 2010 sinking of a South Korean ship and the shelling of a South Korean island.

Referring to the fast economic growth under her father's rule, which drove war-torn South Korea from poverty to the ranks of the world's richest nations, Park urged Koreans to re-create the spirit of the "Miracle on the Han".

Park wants to create new jobs, in a country where young people often complain of a lack of opportunities, and boost welfare, although she hasn't spelled out how she will do either.

Growth in South Korea has fallen sharply since the days of Park's father who oversaw periods of 10 percent plus economic expansion. The Bank of Korea expects the economy to grow just 2.8 percent this year and 2.8 percent in 2014.

Park also faces a challenge from a resurgent Japan whose exports have risen sharply after new Prime Minister Shinzo Abe embarked on a policy to weaken the yen currency.

The won has jumped five percent in 2013 against the yen after a 23 percent gain in 2012, boosting the competitiveness of Japanese exports of cars and electronics against the same goods that South Korean firms produce.

Park last week said she would take "pre-emptive" action on the weak yen, but has yet to specify what action she will take.