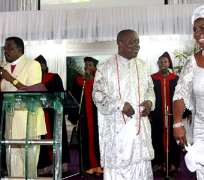 ...As NLC Rallies Support For Governor

SAN FRANCISCO, February 24, (THEWILL) - Delta State Governor, Dr. Emmanuel Uduaghan, Sunday, said that he is committed to the development of the state with state NLC boss, Comrade Williams Akporehe describing him as a good family man, ruling Delta with the fear of God.

The NLC Chairman implored Deltans not to relent in their support for Governor Uduaghan, saying he means well for the state.

At a thanksgiving service held at the First Baptist Church in Warri to mark the 25th anniversary of his marriage, the Governor assured Deltans of more before the end of his tenure in 2015.

At the well attended church thanksgiving service which had in attendance Chief E.K. Clark, the Olu of Warri, Pastor Ayo Oritsejafor and host of others, Governor Uduaghan said that the challenges of leadership were enormous, but that he was determined to leave a lasting legacy behind.

“I am committed to the development of the state. There is no way one government can do everything, but since we are still around, we will do our best for Deltans before we leave office in 2015. Developing all parts of the state is not easy, but I want to remain focused and committed to good governance in the state. We have done a lot in these past years and we are still ready to do more for the remaining two years,” the Governor said.

While urging the Christian Association of Nigeria (CAN) and other religion bodies to continue to pray for peace in Delta State and the country in general, the Governor said there is no position of authority one holds in the country that is easy.

The Host Pastor, Rev. Challenge Ugbede while preaching on the topic; “Why We Pray,” said that people who pray daily get answers from God speedily.

Meanwhile, NLC Chairman in the state, Comrade Williams Akporehe has described Governor Uduaghan as a good family man. â€¨Speaking to newsmen at the venue of the thanksgiving service, the Delta State NLC Chairman said that it takes a committed, loyal and faithful family man to run a state like Delta. â€¨

“I want to say that the Governor is committed to the development of the state. He is a committed family man, a good husband and a good leader hence he has been able to achieve so much for the state so far. Governor Uduaghan is a God fearing man and has the interest of the state at heart always. He is also labour-friendly and we cannot help but to use this medium to congratulate him and his wife on their 25th marriage anniversary,” he said.