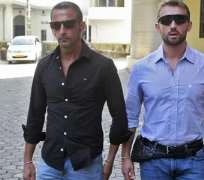 Two Italian marines charged in India with killing two fishermen while on anti-pirate duty a year ago arrived home on Saturday to vote in parliamentary elections this weekend.

"We are happy to be back home. This has been possible because India's Supreme Court ... has shown itself to be very democratic by recognizing our right to vote," Massimiliano Latorre said on arrival at Rome Fiumicino airport with his colleague, Salvatore Girone.

The two sailors, part of a military security team protecting the tanker Enrica Lexie, are accused of shooting the two fishermen they say they mistook for pirates off the southern Indian state of Kerala in February last year.

The incident has caused a serious diplomatic dispute between Italy and India, which have traditionally had good relations.

India's Supreme Court said in a long-awaited ruling last month that India had jurisdiction to try the marines, setting the stage for a criminal trial that could further sour ties between the two nations.

Italy had challenged India's right to try the two, arguing that the shooting had taken place in international waters.

The men were welcomed at the airport by outgoing Prime Minister Mario Monti. They will be allowed to stay in Italy for four weeks.

The Italians also spent Christmas in Italy, after a Kerala court allowed them to join their families for the holiday, on condition they returned to India by January 10, which they did.

The marines are held at the Italian embassy in New Delhi and report to a police station once a week.