SOUTH EAST GOVERNORS AND THE AUCTIONING OF IGBO PRESIDENCY 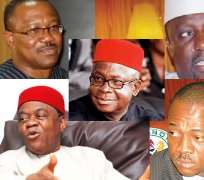 It is obvious that all is not well within the fold of the South East Governors Forum over the issue of Igbo presidency project 2015. In Anambra State, Governor Peter Obi is at loggerheads with Governor Rochas Okorocha over who controls APGA and he derides Okorcha’s attempt at uniting the Igbos for his presidential bid either for 2015 or 2019. Peter Obi cannot comprehend how Okorocha can surface from nowhere and be laying claims to APGA political machinery and the presidency when he, a two term governor had been treading softly on the issue.

Chief Okorocha of Imo State believes that the Igbo have the potential of becoming president in 2015 if there is unity, hence his attempts to unify APGA and give it a national outlook. He also supported the mega party deal that resulted in the formation of All Progressive Congress. This Okorocha’s interests in the top shot have put him in the bad books of Jonathan apologists and they are making every effort to pull him down.

Sullivan Chime of Enugu State never showed any open interest for Igbo presidency project. In August 2012, under the aegis of South East Forum, former chairman of PDP, Okwesilieze Nwodo canvassed support for Igbo presidency at the meeting of South East Forum held at Modotels, Enugu. This stance of Nwodo killed any further interest the fun loving governor had for the Igbo presidency project since his arch-enemy was among the bands seeking support for Igbo presidency. He distanced himself from being part of former Vice President Alex Ekwueme's birthday bash at Okpara Square, Enugu because he suspected the roles of former governors Okwesilieze Nwodo, Chinwoke Mbadinuju and Senator Ken Nnamani in mobilizing for the event.

In Abia State, Governor Theodore Orji had shown little commitment to the Igbo presidency project except perhaps, occasional fine speeches without commensurate momentum. The move by former governor Orji Uzor Kalu to form Njiko Igbo, an umbrella organization to unite Igbos for the presidency, further raised Theodore Orji’s suspicion over the entire Igbo presidency project and he has distanced himself from the entire exercise.

Governor Martins Elechi of Ebonyi State have maintained silence over the issue, His body language have not suggested a flair or disinterest for the project. However, his attempt to support Aja Nwachukwu for the Ohaneze top post was based on ensuring that an Ebonyi man that can articulate Igbo interest without pressure from the outside is enthroned especially for the rainy day.

In the event of all these it is obvious that South East Governors have not formed enough formidable alliance to be able to ask other regions of Nigeria to support their aspirations. While some school of thought believe that Sullivan Chime, Theodore Orji and Peter Obi are jealous of Okorocha’s acclaimed national popularity, others believe that they are afraid of EFCC prosecution and as such must swim with President Jonathan to avoid harassment after they leave office. Others still believe that their interest in the senate seat as retirement benefits after their tenure as governor could be jeopardized if they openly support Igbo presidency. I wrote an article titled 'OhanezeCrisis and the Auctioning of Igbo Presidency parts 1 & 2) where I reported that presidential largesse have turned Ohaneze apart and the Igbo presidency project is being auctioned. A week after the part 2 of it was released, the new leadership of Ohaneze made it clear that they are not interested in Igbo presidency 2015. According to the Ohaneze Publicity Secretary Prince Tonnie Ogonna '' If President Jonathan declines to run in 2015, it then makes it quicker for the Igbo. The bottom line is that Ohanaeze supports Jonathan in whatever decision he takes in 2015'' Therefore,Ohaneze support for any Igbo presidential candidate in 2015 is foreclosed. The northern governors are seriously challenging President Jonathan's second term bid, insisting that he promised to run only one term. While reacting on the isue, the leader of Northern Governors Forum and Niger State Governor, Dr Babangida Aliu,speaking on Liberty FM, Kaduna stated that '“What will be, will be in 2015.

We must remind people of the promises they have made. When he (Jonathan) was going to declare, governors of PDP were brought together to ensure that we were all in the same frame of mind. Some of us, given the PDP zoning, were expecting that the northern states would produce the President for these number of years but God has done His own.

“At that discussion, it was agreed that President Jonathan would serve one term and we all signed and when he went to Kampala, he said the same thing. But for now, President Jonathan has not declared his candidacy and we must not be speculating based on who those are benefiting from such a thing. I believe that we are all gentlemen enough and when the time comes, we will all sit down and see what the right thing to do is.''

In the South South, apart from Seriake Dickson of Bayelsa State and Godswill Akpabio of Akwa Ibom State, the rest are not interested in any Jonathan 2015 project. Rotimi Amechi in Rivers State is at loggerheads with the presidency on the issue.

The Governors in the South West are reaching out to their counterparts in the North to form an alliance in preparation for 2015,resulting in the new mega party, All Progressive Congress while their South East counterparts are chasing rat while the house is burning .

It is obvious that by the actions, inaction and indifference of South East Governors, they have in principle auctioned the Igbo presidency project and any Igbo man hoping for commitment from them will be disappointed.