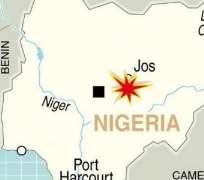 SAN FRANCISCO, February 22, (THEWILL) - Ten persons were hacked to death while two others were injured in a fresh attack, Friday morning, in Kogwom village in Vom district of Jos South Local Government Area of Plateau State

The attack was suspected to have been carried out by Fulani herdsmen as gunmen allegedly stormed the village in the early hours of Friday and shot sporadically and at random, thereby killing the 10 persons and injuring two others.

Confirming the attack in a statement signed by Lt Kingsley Egbo, the Special Task Force (STF) on Jos crisis said the soldiers rushed to the scene as soon as they got an alarm, but the people of the area resisted them from entering into the village, thereby making it difficult for the soldiers to close in on the attackers.

The statement noted that the 10 persons killed were members of same family.

Meanwhile, a survivor, Musa Habila, explained to journalists that the attackers were on black attires and on military helmets. He added that the operation which lasted for about one hour was carried out mainly with guns and machetes.

“it was at about 9pm, I was still awake and studying when I suddenly I heard sporadic gunshots behind my room. I quickly ran out and started shouting but there was no help because no military checkpoint was close.

Habila, who said he escaped the gunshots narrowly, added that "I heard one of the attackers call the other Sani while operating.” He said four of his younger ones and six others were killed.”

Condemning the attack, Special Adviser to Governor Jonah Jang on Media and Publicity, Ayuba Pam, who visited the scene described the incident as barbaric and stressed that the state government will not rest in the search for lasting peace in the state.

Pam said “at about 9pm I received a call from one of the operation Rainbows Staff informing me that there was an attacked in a Kogom village. I earlier got a report that four persons were killed only to discover later that 10 persons were killed, including children.

“We are very surprised that up to this moment that we thought peace has come, we are still experiencing killings," he said.

He noted that “recently the Gbong Gwom Jos, Gyang Buba, together with the Emir of Wase, Mohammed Haruna were on a peace tour in four local government area of the state to strengthen peace, but in spite that, the killings have continued.”

District head of Vwang district, Da Choji Balack, who also condemned the attack and called for the immediate withdrawal of men of the Special Task Force (STF) in the state, also stressed that the Fulani herdsmen alone could not have carried out such attacks without the help of the men of the STF.

Balack expressed optimism that if the Federal Government would withdraw the military, peace will return to the state.

The state Police Public Relations Officer (PPRO), John Onuigbo confirmed the incident, but said he was yet to get details.