How TB Joshua Saved Me From Mental Illness--Hanks Anuku 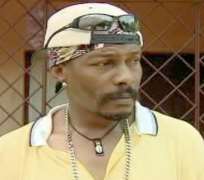 Nollywood actor, Hanks Anuku dazzled many when he was the popular face that graced many movie jacket covers. During his 'hay days', he was the choice of many film producers looking for the 'bad boy' roles.

But like a flower that withers, Hanks became a scarce commodity. For years now, the number of released movies he has acted in recent times can be comfortably counted with the fingers.

In a reported interview conducted recently, the tall and 'scary-look' actor revealed that his career almost got ruined by alcohol and drugs which also almost led to a mental illness.

He stated that even while he was a Special Adviser to Emmanuel Uduaghan, who is the governor of Delta State governor, the illness reportedly forced him out of the government house.

According to him, "Yes, I got my healing through TB Joshua. It is our Lord's doing. I was having issues with mentality for over seven years, you will notice I have not been that frequent in movies for long.

"Even when I was special assistant to our dear governor, I was not in a good state of mind and this affected my work in the government before I was advised to seek for solution in Ghana.

"I spent so much money visiting hospitals, orthodox and unorthodox doctors without positive result. Until I was introduced to
TB Joshua. I was only watching his TV programme in Ghana and was healed.

I put my faith into it just like the woman with the issue of blood and knew that I would be healed and I got my healing.

"I am now a mentally stable man. I have dropped drinking and smoking habit, glory be to God."