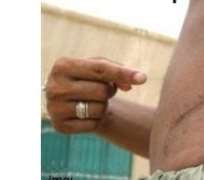 But for the kidney he sold to his Dean of faculty for a First Class Honour a few days to his convocation to the Dean of Faculty, this University of Lagos (UNILAG) graduate would have donated one of his kidneys to safe his dad who is now in dire of kidney to live.

The 24 years old boy recollected how he sold one of his kidneys to the dean of his faculty and he's now left with one which it's impossible for him to donate to secure his dad's passport to live.

He said he was being threatened with the reality of having to spend an additional two years to his already prolonged eight years stay in the school.

Nollywoodgists.com findings gathered that the embattled young graduate was nearly in tears while he explained why he couldn't donate his last and only kidney to his father who is in desperate need of a kidney to survive.

Despite him graduating with a First Class, it is sad to say he's yet to secure an adequate job since as he has been living from hand to mouth.

As at this moment, the said guy is said to be asking friends around if anyone could donate one out of his two kidney to safe his ailing dad and when he starts work, he would appreciate such a friend in a big way.

Wonders of this sinful world! Who has a kidney to donate for a promissory note?